Leafroll reddens the lower foliage of dark-fruit cultivars in September and October. 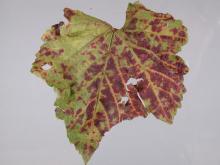 Although this discoloration is due to leafroll, there are many other possible causes so get it correctly diagnosed.
Melodie Putnam, 2009.

Cause There are nine viruses that have been reported to cause leafroll disease in grapevines and are collectively called Grapevine leafroll-associated viruses or GLRaV. Some of the viruses associated with grapevine leafroll disease have been found in Idaho (GLRaV-1, -2, -3), Oregon (GLRaV-1, -2, -3, -4, -7), Washington (GLRaV-1, -2, -3, -4) and British Columbia (GLRaV-1, -2, -3, -4) vineyards. Of the viruses associated with leafroll disease, GLRaV-3 was the virus most often found in surveys in the Pacific Northwest and with transmission by the grape mealybug. The soft scale has also been shown to be a vector of this virus. Symptoms may take 1 to 3 years to develop after infection. Propagating vines from infected stock plants is another way these viruses are moved from one vineyard to the next. GLRaV-1 has even been found in ornamental grapes for sale at retail nurseries. The grape mealybug is common in southern Oregon, eastern Oregon, and Columbia River production areas. It is critical that growers use only certified wood when establishing vineyards. All grapes entering Oregon and Washington are under quarantine and must be certified free of leafroll viruses.

Winegrapes (Vitis vinifera) show symptoms while other grape species are symptomless hosts. The rootstocks AXR and St. George are tolerant of the virus but susceptible to phylloxera. The newer phylloxera-resistant rootstocks; however, are more susceptible to virus problems. Diseased vines tend to be aggregated in the vineyard and disease incidence can increase up to 11% each year. Yield losses of up to 50% to 70% have been observed in vineyards with this disease. Brix reductions also add to the loss over the lifetime of the vineyard. Taken together in one study for an infected Merlot block, losses due to lower yield and Brix reductions translated into thousands of dollars per acre.

Symptoms Leafroll, also called red leaf or white emperor disease, reddens the lower foliage of dark-fruit cultivars in September and October. Reddened leaves may also exhibit green veins. Foliage of white-fruit cultivars may have subtle yellowing at this time. Leaf symptoms typically begin around veraison on lower older leaves and progress up to younger leaves through the rest of the growing season. Vines infected with GLRaV-3 have been observed to retain leaves longer in the fall. Other symptoms include delayed foliation in spring, downward curling or rolling of leaves, and less vigorous vine growth in adverse circumstances. Symptoms may take 1 to 3 years to develop after infection. Potassium deficiency mimics many of the symptoms caused by GLRaV. The vein clearing associated with leafroll disease can be used to discriminate it from similar leaf discoloration caused by other stress factors.

Infected vines may produce fewer, smaller clusters of berries lower than normal in soluble solids. The grapes on red-fruit cultivars do not color well and may not all ripen at the same time.

Leafroll will cause less severe symptoms in ungrafted plants. Some of the leafroll viruses can also cause graft union necrosis in grafted plants, usually when present in mixed infections. Symptom severity depends on the virus, rootstock and scion combination. Thus, there is a wide range of symptoms that can be caused by these viruses. Visual diagnosis is unreliable and vines should be lab tested for confirmation. Can be confused with Grapevine Red Blotch Disease.

Sampling The best time to take samples for diagnosis is in August and September. Petioles on the oldest leaves are the best source of virus if present. It is possible to detect the virus by scraping the inner bark from twigs the diameter of a pencil. This can be done throughout the dormant season.