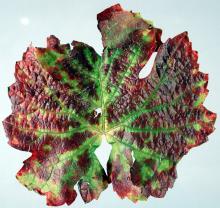 The discolored areas on the leaves expand and coalesce with time to become reddish or reddish-purple blotches that are strikingly apparent towards the end of the season. Although this leaf may be confused with the virus disease leafroll, it tested negative for leafroll and positive for red blotch. 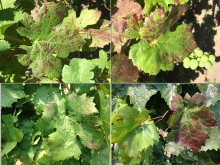 Cabernet Franc infected with red blotch in the Rogue Valley of Oregon. 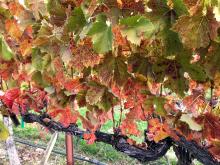 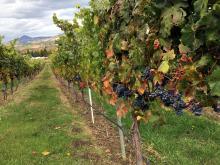 By R. Martin and J. Pscheidt

Cause This disease is caused by Grapevine red blotch virus (GRBV), which was first reported in 2012 from New York and subsequently in California, Washington, Oregon, Idaho, and elsewhere in the United States The discovery occurred when grapevines with red leaf symptoms that tested negative for Grapevine leafroll associated viruses (1-10) (GLRaV) were analyzed for possible new viruses. GRBV is the type member of the new Grablovirus genus, in the family Geminiviridae that is graft-transmissible. All grapevines entering Oregon and Washington must be certified free of the GRBV. It has been shown to be transmitted in the greenhouse by the three-cornered alfalfa hopper (Spissistilus festinus), and other potential vectors are being studied. Studies in southern Oregon indicate disease spread from aggregated areas within vineyards from year to year although the exact mechanism is unclear but suggests an insect vector. The ODA has added GRBV to the quarantine pest list for grape at the wine grape industry's request.

Surveys in Idaho, Oregon and Washington vineyards have indicated the presence of this virus in many winegrape cultivars. Positive samples were collected from symptomatic grapevines of cultivars Merlot, Cabernet franc, Grenache, Pinot noir, Cabernet Sauvignon, and Malbec. In addition, the samples of the white-fruited cultivars; Viognier, Chardonnay, Roussanne, Semillon and Pinot gris, which do not develop any red leaf symptoms were also identified in Oregon vineyards. Grapes tend to have multiple viruses at the same time so other symptoms may be present in positive vines. A survey in eastern Washington from 2014-2015 found 8% of the samples were positive for both red blotch and leafroll. A small survey in southern Oregon found some symptomatic vines (in red blotch positive vineyards) tested negative while some healthy appearing vines tested positive.

Some research indicated yield reduction of 22% and 37% in affected 'Merlot' and 'Cabernet franc' grapevines, respectively, compared with corresponding non-symptomatic grapevines. However, recent vineyard studies in California and Oregon have shown no yield reduction. Most commonly, berries from affected grapevines have reduced sugars (Brix) and skin anthocyanins, but no significant difference in juice pH from berries of symptomatic and non-symptomatic grapevines. Research from Oregon's Willamette Valley shows little to no impact on fruit ripening in most years, including no impact on sugars (Brix) or skin anthocyanin. Conversely, more differences have been observed in GRBV infected vineyards in southern Oregon, where vines are under more heat and water stress than in the Willamette Valley.

Keeping vines well-watered can mitigate some negative effects of the disease. Irrigation of infected vines in southern Oregon reduced the number of red leaves at harvest while deficit irrigation did not change disease severity at harvest (although sugars were reduced).

The three-cornered alfalfa hopper is a green, clear-winged, wedge-shaped (thus the name "three-cornered") insect that is about a 0.25 inch long (about the size of a tiny pea). The green color is similar to the grape leaf, so they are difficult to detect. It feeds on many other plants, including alfalfa, beans, cowpeas, melon, oats, sweet clover, tomato, and wheat. It does not feed much on grapevine but when it does, it can girdle the petiole causing the leaf to turn red. It is not known if management of this vector in the field will effectively manage the disease. Current research may also find other arthropod vectors.

Symptoms In red winegrape cultivars, symptoms initially appear as small, irregular red-colored areas between major veins on mature leaves at the basal portion of the shoots of affected vines, and symptoms develop on leaves further up the canes as the season progresses. The discolored areas on the leaves expand and coalesce with time to become reddish or reddish-purple blotches that are strikingly apparent towards the end of the season. In some cultivars the veins become red in contrast to the green veins usually observed with grapevine leafroll disease. Additionally, the leaf blades do not curl downward as is often seen in plants infected with the Grapevine leafroll-associated viruses. In general, the two diseases are easily confused. Multiple infections of different virus are likely and contribute to this confusion. At this time there seems to be considerable variation in degree of reddening depending on cultivar and rootstock. Leaves also seem to stay on the vine longer in the fall. Water stress on infected plants results in more severe symptoms and has a greater impact on fruit quality.

White winegrape cultivars that tested positive for the virus do not exhibit reddening of leaves, though 'Chardonnay' develops interveinal chlorosis that can progress to necrosis before leaf drop. In the case of 'Pinot gris', the Brix levels were not reduced, though yields were reduced dramatically. In 'Chardonnay' (and 'Riesling') Brix levels were affected significantly similar to that observed in 'Cabernet Franc'.

Reddening of foliage alone can be caused by many different factors including nutrient deficiencies, girdling, other viruses, and trunk diseases.

Sampling The virus appears to be systemic as it can be found in all parts of the grapevine. However, it is not evenly distributed through the entire year. It is best to sample vines late in the season such as post-harvest (October or later). Tests run on dormant cane samples taken during winter (the dormant season) are the best bet for getting valid results. Earlier samples in-season have led to false negatives.

Cultural control Only general control tactics for plant viruses are advised at this time since so little is known about this disease.