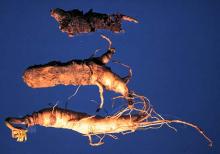 Note the few foliar symptoms associated with a root nearly completely rotted away, with only a hollow shell remaining.

Very early stages of the disease shown in cross sections to the left and center, and a severely affected root cross-section at the right. The disease progresses to the interior of the root, eventually completely decaying it.

Cause Ilyonectria destructans (formerly Cylindrocarpon destructans) can cause a root rot of ginseng as well as a decay of woody seedlings such as confers. This fungus has also been associated with replant failure when ginseng is planted back into ground that had already been used for ginseng production (however, many other problems, biotic and abiotic, are likely involved). A different fungus causes the disorder known as rusty root.

Roots of all ages appear susceptible. The fungus penetrates the epidermis directly followed by intracellular hyphal growth in the cortex. Wounding and acidic (pH 5) growing conditions contribute to disease severity. Increased iron availability either in the soil or as foliar amendments was found to encourage disease severity by encouraging fungal growth and sporulation. Wet soils were not found to be a major factor.

Symptoms Plants may fail to come up in the spring; during the growing season, plants may rapidly wilt and not recover or show other symptoms of stress such as premature leaf coloration. Lesions progress over the surface of the root and move deep into the cortex. In advanced cases, lesions extend throughout the cross-section of the root, effectively severing it in two. The disease also can start at the root tip, causing a firm decay that progresses toward the crown. Under cool, moist conditions, the rot may progress to within 0.5 inch of the crown before the foliage wilts. In its most severe form, the disease leaves behind nothing but a fragile shell of the root; with the interior completely rotted away.

Cultural control The following have been suggested.