It is important to scout for and quickly diagnose limb problems during the summer. Symptoms of this disease can occur very quickly.

Crown symptoms progress from the top of the tree down to lower limbs.

Marginal leaf burn may be seen on leaves as the vascular system collapses. 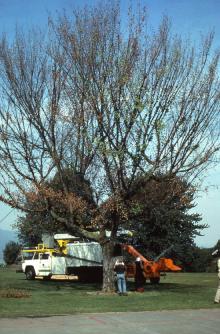 Trees can die rapidly during the spring and summer.

Many trees in an area can die from Dutch Elm Disease from root grafts and insect flights.

Elm logs saved for firewood contribute greatly to the DED problem. These logs had numerous bark beetle galleries and should not have been saved.
Photo by Jay W. Pscheidt. 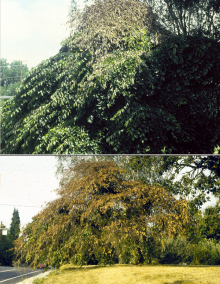 Camperdown Elms are also susceptible and can die within a few months of infection.

Diseased trees were first found in the Pacific Northwest in Boise, ID in 1968. The next reports were from Ontario in 1973 and La Grande and Union, OR in 1974. A single tree was found in Portland in 1976 and was removed promptly. No other trees were identified until a new outbreak in Eugene and Portland in 1986. Since then, additional Oregon locations include Hillsboro in 1987, Salem in 1988, Corvallis in 1995, Heppner in 1999, Pendleton in 2000, and Medford in 2006. Most of the diseased trees have been from the Portland area. The disease continued its spread with reports from Moscow and Weiser, ID and Spokane, WA in 1990 and Tacoma and Bellevue, WA in 1994. The disease has continued to spread into the greater Seattle area. As of 2008 it has not been found in British Columbia but it was confirmed Utah in 2019.

The disease is spread by several bark beetles, the most important of which is the smaller European elm bark beetle (Scolytus multistriatus). These bark beetles breed in diseased trees but feed on healthy ones.

The fungus produces spores (Graphium type) in beetle galleries beneath the bark of dead or dying wood. Spores on or in the beetle's body can be carried to and infect healthy trees during feeding. Beetles overwinter as larvae under the bark of unhealthy or injured trees or cut logs. In spring, larvae complete their growth, pupate, and change into adult beetles. The adult flies a short distance and feeds on the bark of small branches of living elms (beetles are active from mid-May to early October). After feeding in the canopy of healthy trees, adults seek breeding sites under the bark of dead or weakened trees or logs. They bore through the bark and into the cambium area to lay eggs.

Spores in the feeding site grow into the tree's vascular system. The mycelium continues to invade the vascular system, forming new spores (Sporothrix type) and toxins that clog the xylem and kill living cells. The result is a wilting and dying of the tree distal to the areas the fungus invaded. Trees are most susceptible in spring, during shoot elongation. The entire tree may die in a few weeks or take a year depending on how rapidly the fungus progresses down to the roots.

When elms grow within 40 ft of each other, their roots often cross and form natural grafts. The fungus in the vascular system of one tree can invade the adjoining tree through the graft.

Many elm species are highly susceptible to the disease including American, Belgian, English, red, rock, September, European white, and winged elms. Intermediately susceptible are cedar, European field, and wych elms. Chinese, Japanese, and Siberian elms have resistance. Oregon continues to quarantine all Ulmus, Zelkova and Planera spp., which must be certified free of Dutch elm disease (and elm yellows) before entering the state.

Symptoms Early symptoms are wilting leaves and sparse foliage, first on single limbs but later the entire tree may be affected. Yellowing and premature defoliation follow. Symptoms may show only a few days after infection has occurred. If infection is high in the tree and late in the year, disease progress may be slow. If main limbs are infected through lower branches in spring, progress may be rapid, and the tree can wilt and die in a short time. These symptoms may be confused with other vascular wilt diseases or summer heat stress.

Sampling Select twigs about 6 inches long from recently killed branches or small pieces of living trunk that show a dark discoloration or brown streaking of the wood just below the bark. Trunk samples near the root flares have been used in Portland, OR to identify infected trees. These trees tested negative for DED in upper branches and this might be due to root graft transmission. Decayed bark, badly rotted wood, or dry, dead twigs are of no value for identification.

Cultural control Many methods must be integrated to manage this disease. Prompt sanitation is the primary way to prevent disease.

Chemical control Use only when integrated with cultural controls. Trunk injections are least effective and must be repeated over the life of the tree (possibly every other year). Injections are recommended only for extremely high value trees. Preventive treatments are much more effective than therapeutic treatments. Hole placement is critical for uptake and complete tree coverage. Generally, make small, shallow holes close to the ground on the root flares. Rates are based on trunk diameter. See labels for details.

Biological control Injecting Verticillium albo-atrum WCS850 into trees has been effective at limiting new infections but must be repeated annually. This treatment will not control infections that arrive through root grafts. There are no commercial formulations.