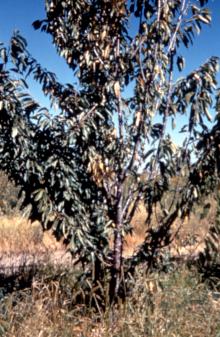 Symptoms may be seen on only one side of the tree.

Vascular streaking and wilt found in this cherry.

Cause Verticillium dahliae, a soilborne fungus that may remain viable in soil for years. The fungus forms microsclerotia within infected tissues. Once in the soil they germinate and infect roots. The fungus grows into the xylem where it colonizes the plant through mycelial growth and conidial production. Fluid movement in the xylem passively transports the conidia. Once in the xylem, this fungus partially blocks water movement and produces toxins that result in wilt symptoms. The disease usually affects young trees coming into bearing but may be found on older trees. Verticillium wilt affects numerous plants including apricot, lambsquarters, nightshade, peach, pepper, phlox, potato, raspberry, shepherd's purse, strawberry, and tomato. Plant-parasitic nematodes also can increase disease incidence and severity. Abundant irrigation, high nitrogen fertility, and cultivation that injures roots have also been associated with higher disease incidence.

Symptoms Some lower leaves yellow, and later so do higher leaves; often, twigs and branches also wilt and die. East of the Cascade Range, leaves may turn reddish-orange. Spurs and twigs may die so rapidly that leaves remain attached. Leaves of current-season shoots and older wood may drop off or be less numerous than on healthy trees, giving trees an open or bare appearance. Some branches may appear healthy while others wilt and die. Discoloration (brown-red) in sapwood of some diseased branches or trunks can be observed by cutting into the branches with a pocket knife. In cross section, the xylem (wood) may be discolored in arcs or rings.

Sampling A preplant soil test for propagules of this fungus will aid in site selection. Nurseries may wish to test individual core samples to determine the distribution in a particular field. The presence of any microsclerotia in the soil should be interpreted as a potential disease risk.