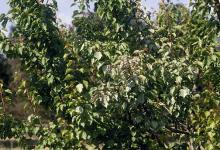 This is silver leaf on apricot, which has similar symptoms. Note the branch in the middle with lighter colored leaves.
Photo by Jay W. Pscheidt, 1996.

Cause Chondrostereum purpureum, a fungus that attacks shoots, branches, trunks, and roots. In Oregon, the disease has been a problem in some sour cherry and prune orchards. It is known also to affect sweet cherries, apples, apricot, pears, peaches, plums, nectarines, some small fruits (such as blueberry), alder, willow and poplar.

The fungus is a saprophyte growing on dead trees, prunings, stumps, posts, and fallen logs. It can become an active parasite by entering living tissue through a fresh surface wound such as pruning cuts, mechanical injury, winter injury, and insect damage. Pruning cuts are most susceptible within 1 week of wounding. After infection, fungus growth is systemic.

Symptoms A silvering of the leaves usually shows first on one or two small branches, extending rapidly to affect all branches on a limb and eventually to all limbs on the tree. The silver leaves become ashy colored, sometimes tinged with green, and edges tend to curl slightly. The leaves' light color shows a marked contrast to the normal dark green of healthy leaves. Soon after leaves silver, the branch begins to decline in vigor and dies either the same season or after one or several seasons during which leaves continue to silver.

As the branch declines in vigor, leaves fall prematurely until the branch is bare and stands out prominently. The branch usually dies after infection, but trees have been known to recover. After the branch dies, the fruiting structure of the fungus pushes its way through the dead bark and takes the shape of a bracket fungus. Brackets are quite variable in form. They appear either as flat incrustations up to several inches long covering the branches' undersides or the sides of the trunk, or as bracket-shaped projections, 1 to 3 inches wide, arranged in tiers. Bracket undersurfaces, the sporulating surfaces, usually are purple although color may vary from salmon pink to purple.

Chemical control Injection of fungicides into diseased trees does not have an effect on disease progression. Chemical protection of pruning wounds is possible but there are no chemical registrations.

Biological control The fungus Trichoderma viride has been shown to protect pruning wounds but there are no registrations.