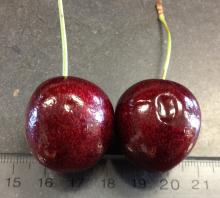 Pitting may be subtle as on the left cherry or obvious such as on the cherry to the right. 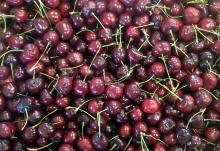 Depending on conditions or the year, cherry pitting can be severe.

Cause There are many reasons that cherries may develop surface depressions or "pits" on the outside of the fruit. The most common cause is physical damage during harvest or postharvest handling. As a response to this damage pits may appear after a few days in cold storage. Some cultivars, such as Van, Lapins, and Sweetheart are more sensitive than others. The following cultivar list is from resistant to pitting to susceptible: Regina, Chelan, Bing, Skeena, Sweetheart, Lapin and Rainer. Dropping the cherry against a hard surface such as a picking bucket or during packing are common causes of pitting. This type of damage increases at lower fruit temperatures.

There are other causes for pitting. The fungi that cause brown rot or cherry leaf spot, and certain viruses (such as the Petunia asteroid mosaic virus) and even the bacterium Pseudomonas syringae can cause preharvest pitting. Harvest of over-mature fruit as well as over cropping have also been implicated in causing cherry pitting. However, fruit pitting due to these other causes is not common in the absence of the other more common factors.

Symptoms Normal appearing cherry fruit develop surface depressions that are generally circular and may be broad or sharp. Sometimes a small bit of necrotic tissue may be seen at the bottom of a pit. Pits may range in size from small subtle depressions to large depressions in the side of the fruit.