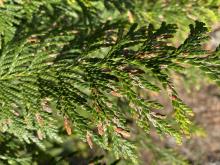 This Thuja x 'Steeplechase' has leaf blight where the apothecia are embedded in leaf tissues which have dropped out leaving deep pits.

Many lower needles can become diseased.

Light-brown to tan spots appear on the leaves, and large brown fruiting structures of the fungus (apothecia) form in the center of these spots.
Photo by Ralph S. Byther

Cause Didymascella thujina, a fungus. Although the disease is found mostly in warm-moist environments typical of coastal low elevations of the Pacific Northwest, the pathogen is endemic to North America and found throughout the natural range of western red cedar. Spore discharge from wetted apothecia begins in late spring and increases gradually during the summer, reaching a peak between late August and early November. In the PNW, there may be little inoculum during the annual summer drought but a second ascospore release can occur in the fall if conditions are wet and above 50°F. Spores' stickiness helps them adhere to foliage. Spores produced in the summer can germinate in a few days, but many produced in fall remain dormant until the next spring. Conditions that keep foliage wet, aid disease development and spread. Symptoms develop the season after spore dispersal. Trees and shrubs of all age classes are attacked whether in nurseries, landscapes or forests. However, seedlings are most severely affected. The disease is found primarily on western red cedar (Thuja plicata), especially the cultivars Atrovirens and Excelsa.

Symptoms Small, bleached spots on the upper surface of one-year-old leaves appear first. One or several brown to black fruiting structures (apothecia) appear on the small leaves in late spring. Leaves turn brown and drop in fall. Infected leaves that remain on the tree turn ashy gray. Apothecia are imbedded in leaf tissues; the entire structure drops out, leaving deep pits. The disease progression gives the appearance of having been scorched by fire.