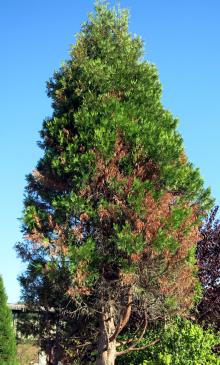 Greater incidence of dead branches lower in the crown and scattered in among living branches. 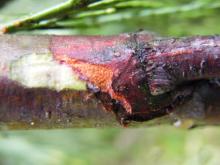 Margin between dead branches above (to the right) and live tissue below (to the left).
Dave Shaw, 2008. 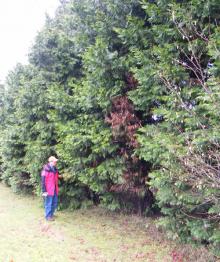 Flagging branches on this Incense Cedar near Sweet Home, OR.
Dave Shaw, 2008. 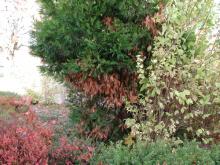 Flagging is low on this tree.
Melodie Putnam, 2007. 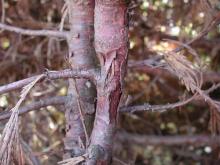 Note the classic hour-glass shape of this canker.
Melodie Putnam, 2007.

Cause A branch dieback of incenses-cedar has been observed in landscapes from Portland to Cottage Grove, OR areas. First observed in the 1990's but became more widespread in the 2010's. Phaeobotryon cupressi, a fungus, was shown to be able to cause these symptoms. In addition, a Diplodia sp. and a Seiridium sp., have also been found in association with branch cankers on limbs that have died back. Each fungus may be responsible for similar symptoms. This is thought to be a problem only on trees that have been weakened from growing on a poor site, drought, root damage, or other sources of chronic stress. Spores produced in cankers can spread via water splash to new tissues and initiate new infections. Sporulation has been observed during the growing season, but when spore-production begins and the length of time spores are present is unknown.

Although trees do not die from this disease they are of much lower aesthetic value. Owners typically prune off the dead limbs each year, until only a few feet of living branches near the top remain. Many affected trees are ultimately removed.

Symptoms Symptoms have been observed on older landscape trees that have been well established, as well as on nearby younger trees. Symptoms generally show up on the lower portion of trees as dieback of the smaller branches, Dead branches frequently appear intermixed with live ones on larger branches. Cankers are sunken and constricting, but are not resinous. There is a distinct line between necrotic tissue and healthy tissue at the canker margin, which is more obvious when the bark is removed. Trunk cankers have occasionally been observed. The disease progresses slowly up the tree resulting in significant branch loss over several years. Damage is sometimes more extensive on younger trees affecting a larger proportion of the crown and killing larger-diameter branches.

Chemical control It is unknown if any chemicals will aid in protecting trees from further spread of the disease.