Kabatina on Blue Atlas Cedar. The bark on the branch has been cut away to show how the pathogen has come in through the foliage and into the branch causing a necrosis in the cambium.

Dieback of this branch is due to the more common fungus Sirococcus conigenus. Symptoms are similar for other fungi that also cause a needle blight and twig dieback.
Photo by Melodie Putnam. 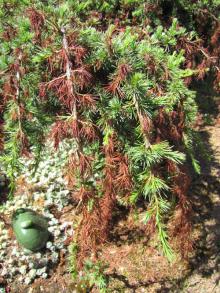 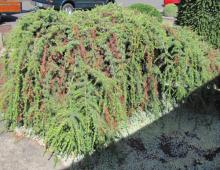 Cause The fungi Sirococcus conigenus, S. tsugae and Kabatina sp. have been associated with blighted needles of Altas (Cedrus atlantica) and Deodar (Cedrus deodara) cedars in both Oregon and Washington; however, Sirococcus is found most often. More of a problem in years with prolonged wet, cool springs. Infection is on or adjacent to needle bases on new shoots. The disease cycle is completed in 1 year, although spore dispersal from dead parts may continue an additional 10 months. The fungus overwinters in dead shoots. Conidia are dispersed by splashing water during the spring and summer, with peak dispersal during the period of host shoot growth. Temperatures of 60°F to 70°F are most favorable for disease development. Symptoms appear about 2 weeks after infection, and lesion expansion on a given shoot may be completed after 4 to 6 weeks.

Symptoms Tan-pink needles are found in the spring. The blight may be only on the needles or extend through the new shoot into the previous year's growth. Terminal or lateral shoots may be blighted. Discolored tissue does not extend far into the branches. Shoot death and needle drop on established plants occur from June into August. Pycnidia develop on the bases of dead needles and along the stem of the dead shoots in late spring to early summer or the following spring. Similar symptoms have been seen without the association of any fungi.

Cultural control Remove and destroy blighted plant material and plant debris that is found under trees or caught in limbs.

Chemical control No chemicals are specifically registered for this disease on cedar. However, according to IR-4 data, products that contain mancozeb, copper hydroxide or azoxystrobin are safe on these trees and may have some effect against these fungi. Use when new shoots are breaking bud and expanding.