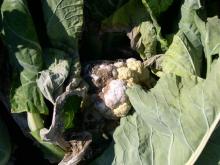 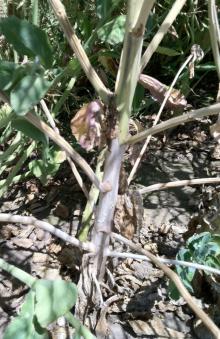 The stem of a cabbage seed plant with Sclerotinia.  Note the bleached out coloration on the stem base along with the small mats of white mycleium, which may be the initals that develop into sclerotia. 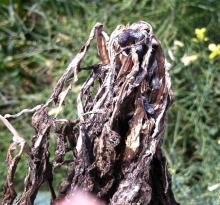 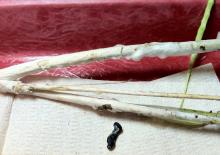 Detached stem from a Chinese cabbage seed plant showing the white lumps that are developing sclerotia. In the foreground is a fully-developed, irregularly-shaped, black-colored sclerotium.

Cause Sclerotinia sclerotiorum is a cosmopolitan fungus that occurs across the globe, infecting a very large number of plant species including radish and Brassica crops. Other susceptible host plants include bean, carrot, pea, lettuce, potato, green pepper, cucurbits, parsnip, sunflower, herbs including mint, fruit trees including apple, nectarine, and sweet cherry, and a large number of ornamentals both woody and herbaceous. Weeds can also be host to S. sclerotiorum; dandelion (Taraxacum officinale) is a very susceptible weed host.

This fungus survives as sclerotia, which may be associated with infected plant residues, contained in seed lots (external or internal to seed), or persist in the soil. Sclerotia can survive three to five years in the soil, depending on environmental conditions and cropping practices. Typically, strains of this fungus outside of tropical zones require a conditioning period in moist soil of several weeks at 40°F or cooler temperatures, after which sclerotia can germinate in soil when the soil water potentials are ≥-100 kPa and temperatures are between 41°F and 68°F. The production of apothecia appears to be prevented when soil matric potentials are below -0.05 MPa. The upper temperature threshold for conditioning and germination of sclerotia is 68°F and 77°F, respectively. Typically, sclerotia germinate and then produce a small, stalked, cup-shaped fruiting structure known as an apothecium, which forcibly ejects millions of ascospores into the air. Sporulating apothecia may persist five to ten days while released ascospores can survive up to two weeks, depending on environmental conditions. Since ascospores require an exogenous nutrient source before infecting a plant, the primary sites for initial infection are senescing tissues such as spent blossoms and declining leaves or plant tissues that have suffered mechanical injuries or wounding through infection by other pathogens. For infection, ascospores require free moisture or a relative humidity close to 100% with a temperature between 50°F and 86°F. Sometimes sclerotia germinate and produce undifferentiated mycelium that directly infects plant portions just below or at the soil line. After infection of the plant has occurred, the mycelium spreads by hyphal growth, the fungus can then invade any healthy, vigorous part of a plant with which it comes in contact. The pathogen may grow from plant to plant if a diseased plant is in direct physical contact with neighboring plants. Moist conditions within the plant canopy favor infection, as do rain, dew, and/or irrigation practices that keep foliage wet for long periods.

Symptoms Disease is most commonly observed on aboveground plant parts. Diseased tissues may first appear as water-soaked areas and then eventually turn a bleached white or brownish color with fluffy, cottony-white mycelium generally present. Flower petals and injured or senescing plant tissues are common areas for the primary infection. The fungus may invade the base of a plant's main stem or upper roots near the soil line, causing a rapid wilting and death of the entire plant, or it may infect upper portions of the plant canopy including stems, heads, and leaves. As infected plant tissues decay, numerous sclerotia develop within and/or on the surface of plant tissues. Sclerotia gradually change from a white coloration when immature to black when fully developed; they are hardened, roundish to oblong, irregularly-shaped bits of mycelium. Fully mature sclerotia are black on the surface and white inside.