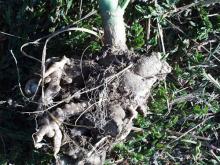 Note the clubbing of the broccoli roots.
Photo by Cynthia M. Ocamb, 1998. 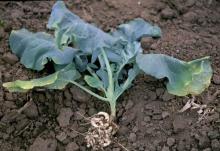 Transplant infected even before being set out in the field.
Photo by Melodie Putnam, 1997.

Cause The disease is caused by Plasmodiophora brassicae, a fungus-like microorganism that can survive in soil 18 years or more after an infected crop. This obligate parasite has been considered a primitive fungus or slime mold, but is now classified as a member of the group of protists named Cercozoa. This pathogen is cosmopolitan, likely affects all members of Brassicaceae family. The microorganism that causes clubroot occurs worldwide and possibly infects plants in the rose, poppy, and grass families. However, these plants rarely show typical symptoms of the disease. Viable spores of Plasmodiophora brassicae were detected on canola, pea and wheat seeds as well as on potato tubers harvested from clubroot-infested fields in Alberta, Canada.

Soils that are cool, wet (70% to 80% water-holding capacity) and acidic favor the pathogen. Zoospore movement and infection is promoted by soil moisture levels above 50% soil water-holding capacity. Spore germination and infection of root hairs is inhibited by the presence of calcium and an alkaline pH, although calcium is critical for this pathogen's reproduction and growth. Heavy rains, flooding, and irrigation water run-off can move resting spores with the movement of soil, especially on sloping lands.

There are races of the pathogen that infect or cause more severe disease in certain crucifer species. It has been observed by OSU that brassicas and radish plants can be infected but asymptomatic, and resting spores were observed in inside asymptomatic root portions, suggesting that pathogen population could increase even with the use of highly resistant varieties.

Symptoms The distinctive symptom is abnormally large roots-fine roots, secondary roots, the taproot, storage roots, or even on the underground stem. Roots develop clubs (swellings) that can be up to 6 inches wide. The largest clubs usually are just below the soil surface on the larger roots. Affected seedlings will not show any root swellings until about 3 weeks after infection. When susceptible plants are attacked in the seedling stage, they can die. When plants are attacked at a later stage, the disease rarely kills, but roots that are severely distorted have a reduced capacity to absorb minerals and water from soil. Affected plants wilt in hot weather but partly recover at night until the disease affects a larger portion of the root system, after which wilting becomes irreversible. As a consequence of major root infections, top growth may be stunted, yellowish, and likely to prematurely bolt or to wilt in hot weather. Severe infections can result in lodging of the plant or possible death. But even with extensive root clubbing, top growth may be nearly normal, depending on environmental conditions and cultural practices.