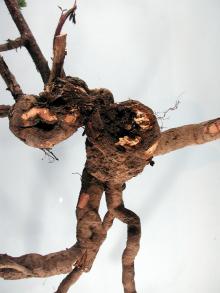 Among many problems this blackberry had Armillaria root and crown rot.

Cause Armillaria mellea, a fungus, infects blackberry roots, killing the cambium and decaying the underlying xylem. This is a soilborne fungus that is capable of attacking many different plant hosts. These fungi are most commonly found in forests and natural areas where they infect a variety of trees and shrubs. Therefore, the disease is most common in newly established blackberry fields that are planted on land recently cleared of native vegetation.

This fungus may form mushrooms at the base of infected canes in fall and winter. Mushrooms produce wind-blown spores, but these spores are not a significant means of infecting healthy blackberries. The fungus spreads vegetatively, below ground, which leads to the formation of groups of dead and dying plants called "disease centers." The fungus can survive on woody host roots long after the host dies. Its vegetative fungal tissue (mycelium) decomposes root wood for nutrients as it grows. When infected plants are removed, infected roots that remain below ground serve as a source of inoculum for blackberries planted in the same location.

Symptoms The first visible disease symptom is a decline and dieback in which leaves turn yellow, wilt, and die. This may occur only on one side of the plant or in one or two canes. Symptomatic plants generally occur in patches in the field. Diagnostic mycelial fans can be observed beneath the bark of the root crown of infected plants. Dig down about a foot below the soil line and use a pocketknife to remove thin layers of bark from the root collar. Mycelial fans are thick, white layers of fungus that adhere to the root bark and/or the wood beneath the bark. Armillaria also makes black, shoestring-like structures called rhizomorphs, which are occasionally found within the bark and/or extending into surrounding soil. Rhizomorphs may look like roots on the outside but have an entirely different structure when cut open in cross-section. Occasionally, in fall, yellowish-brown or honey-colored mushrooms may appear around the bases of infected plants.

Chemical control Soil fumigation can also help reduce inoculum, but it is expensive and the site should be properly prepared to achieve optimal efficacy. Large roots and woody debris greater than 1-inch in diameter must be removed before fumigation occurs because chemical fumigants do not easily penetrate these materials and may leave a viable source of inoculum in the soil. In addition, soil fumigants are effective only to the depth that they are applied in the soil, so any inoculum remaining below the fumigation layer may reinfest the overlying soil once the fumigant has dissipated. Finally, plastic tarps, such as totally impermeable films (TIF) should be applied immediately after fumigation to help retain fumigants in the soil and increase efficacy.