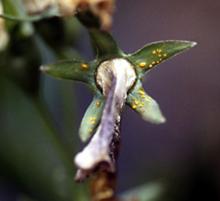 Orange dots on the sepals are rust pustules. 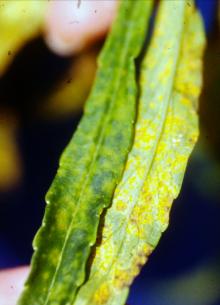 Chlorotic leaf spots in the top side of leaves followed by the development of orangeish pustules on the underside of leaves.
Phil Hamm, 1994.

By B. Warneke and J. Pschiedt.

Symptoms The first symptom generally observed is chlorotic leaf spots followed by the development of numerous orange-to-reddish-spore masses (pustules) on the underside of leaves. Pustules can also form on the top of leaves and stems. Pustules are made of plant cells that have ruptured due to excessive sub-epidermal production of urediniospores or teliospores. Teliospores produced by P. campanulae will usually appear more reddish-brown in color. Teliospores can be distinguished from urediniospores via light microscopy by their darker color and division into two cells by a septum.

Cultural control Prevention is the best control but in many cases, symptoms are observed after the disease has already spread.