Whole leaves to small parts of leaves can be affected. 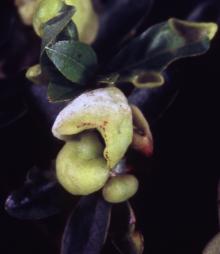 The strange looking tissue in the center is galled leaf tissue. 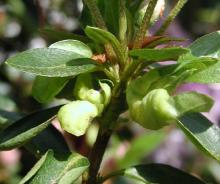 Note the healthy leaves on top and the galled leaves in the middle.
Photo by Robin Rosetta, 2006.

Cause Exobasidium vaccinii, a fungus that is believed to overwinter as spores adhering to bark and bud scales and to cause infection with the opening of buds in spring. Older leaves are resistant to infection. Infection is dependent on high humidity and moisture during bud break. Gall growth is due to plant cell division resulting from the stimulus of hyphal growth within host tissue. When galls are still soft, the fungus grows between epidermal cells, breaks the cuticle, and sporulates giving the gall a white cast. Diseased inflorescences of Rhododendron calendulaceum (flame azalea) produced fewer flowers, smaller individual flowers, and had a lower probability of producing fruit. Diseased branches were more likely to die the following year.

Occurrence in the Willamette Valley has been quite variable from severe for a few years, back to back, to hardly noticeable for several years in a row. Hosts of this fungus include Camellia, huckleberry (Vaccinium spp.), Kalmia, kinnikinnick, Leucothoe, madrone, Pieris, and salal.

Symptoms Either all or part of a leaf may become thickened, fleshy, and covered with a white bloom of spores. At first, diseased leaves are succulent and white, but they later shrink into hard, brown, gall-like bodies. Galls are composed of fungus-infected plant tissue.

Chemical control Apply the first spray before budbreak in spring and the second spray 2 to 3 weeks later. Some references call for regular applications until all galls have dried up. Symptom reduction is then seen the following spring. Other references indicate chemical control is unsuccessful.