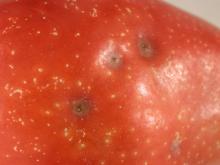 Bitter pit can occur due to a Ca deficency. 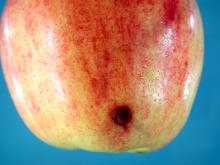 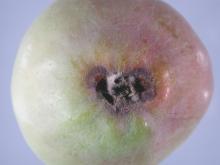 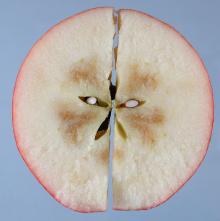 Internal browning of this 'Braeburn' apple. 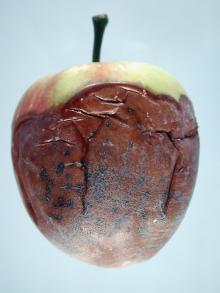 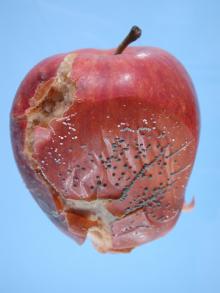 Cause There are many storage rots, which are mainly caused by fungi. A 2003 to 2005 survey of 'Red Delicious', 'Fuji', and 'Golden Delicious' fruit after harvest in Washington found that gray mold (Botrytis cinerea) and Sphaeropsis rot (Sphaeropsis pyriputrescens) caused 28% and 17% of the total decay, respectively. Speck rot (Phacidiopycnis washingtonensis) occurred sporadically. Another survey of 160 grower lots in 2016 found that blue mold, gray mold, bull's eye rot, speck rot and Mucor rot accounted for 45, 25, 10, 8 and 10% of the total decayed fruit, respectively. Incidence of Sphaeropsis rot had dropped to less than 0.5%. Lambertella rot (Lambertella corni-maris) has also been described from brown, spongy decays originating in wounded apples. Crabapple pollinizers can be very susceptible to these fungi and may be a significant source of inoculum for many of these fungal rots. Many of these biotic problems can cause decay on pear as well and are covered in a separate section on Pear-Storage Rots. Several other abiotic disorders including bitter pit, Jonathan spot, lenticel breakdown, scald, and water core, can be problematic on apple after harvest.

Bitter pit is a physiological disorder resulting from calcium deficiency in the fruit. It can develop within the first month or two of cold storage. Conditioning 'Honeycrisp' after harvest, a common practice, can exacerbate bitter pit.

Jonathan spot occurs on cultivars Jonathan, Golden Delicious, Idared, Newtown, Northern Spy, Rome Beauty, and Wealthy. It is often but not always associated with lenticels. The disorder may appear before harvest but usually after long-term regular air storage.

Lenticel breakdown is a skin disorder that becomes more of a problem, as large, mature apples are held longer in storage. Late-harvested fruit and those with a mineral imbalance are more susceptible. Although lenticel breakdown can be seen on many cultivars, 'Gala' apples are generally more susceptible. Some postharvest practices such as washing fruit with high concentrations of soap or running fruit through hot dump tank water can worsen the symptoms.

Scald is a cosmetic problem where a few layers of cells immediately beneath the skin turn brown. Fruit may look fine in cold storage but symptoms may become visible after a few days at room temperature. Fruit immaturity, high nitrogen, low calcium, warm preharvest weather, delayed cold storage, high storage temperature and high storage humidity are factors that can increase scald severity. Cultivars like Granny Smith and Red Delicious are the most susceptible while cultivars Fuji, Gala, and Pink Lady are usually much less susceptible.

Sodium burn occurs when water systems have been used for long periods with regular additions of sodium hypochlorite. The sodium accumulates in the water solution and can cause peel browning at 100 ppm or greater. Cultivars such as Gala, Granny Smith, and Fuji are the most susceptible, as are pears.

Soggy breakdown is an internal browning due to very low storage temperatures and can be very problematic on 'Honeycrisp'.

Water core is due to liquid-soaked tissue around the vascular bundles of the apple. Fruit with mild symptoms may recover; whereas, severe soaking leads to internal browning and breakdown.

Symptoms Bitter pit is distinguished by circular or slightly irregular depressed spots that appear on the fruit surface, beneath which are brownish or streaked necrotic areas. Pitting (discrete necrotic spots) may not always be visible from the outside of the fruit. Necrotic tissue is usually soft until it dries out. Pits are more common on the calyx-end (blossom end) of the fruit but can occur all over the fruit surface.

Jonathan spot may only show as small brown-to-black spots localized around lenticels. Spots may sunken but generally do not affect the flesh. On the surface, spots can enlarge, coalesce, and turn from yellow to light or dark brown and eventually black. Symptoms may be less frequent at the calyx end compared to blush areas.

Lenticel breakdown is characterized by small, necrotic, sunken or pitted areas centered on the lenticel. Spots may be pinpointed or enlarged to several millimeters.

Scald develops as a general surface browning of the skin and can be more severe on the shaded side of the fruit. Light-to-dark-brown discoloration of the peel occurs in patches around the fruit surface but especially at the calyx end (blossom end). In severe cases, the cuticle becomes wrinkled in appearance.

Sodium burn symptoms include skin browning especially near the calyx bowl where liquid residual water can increase sodium hypochlorite accumulation but can also develop on fruit shoulders and on bruised or cracked areas. Symptoms usually, take several weeks in cold storage before they become visible.

Water core, which is observed mainly near the core when apples are cut open, appears as water-soaked, glassy core that may harden. Eventually, severe internal browning and breakdown may become visible from the outside.