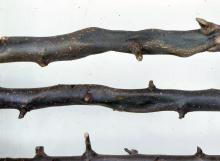 The disease appears as a flattening of shoots and limbs on 2- to 3-year old growth and as the branches become older, the flattening becomes more pronounced and deep furrows develop.

Cause These diseases are associated with graft-transmissible viruses called Apple rubbery wood virus 1 and 2. They were assumed to be caused by phytoplasmas, but repeated attempts to confirm this association have failed. Sensitive cultivars include Lord Lambourne, Gravenstein, Golden Delicious, Gala, and Splendour. The disease can reduce fruit yield up to 30% in apple and 50% in pear and infected trees are more susceptible to frost damage. Many old rootstocks introduced from Europe were uniformly infected with the pathogens that cause these diseases. As of 2018, this has not been a common problem in the apple industry.

Symptoms On many commercial cultivars, there are no acute symptoms, although fruit quality and yield may be adversely affected. On sensitive cultivars, branches fail to develop properly and remain very pliable and droop under their own weight. The affected limbs are also more prone to cold and frost damage than healthy limbs. On cultivars such as Gravenstein, the disease appears as a flattening of shoots and limbs on 2- to 3-year old growth. As the branches become older, the flattening becomes more pronounced and deep furrows develop. Trees exhibit reduced production, and the diseased limbs are very prone to breaking.

Both types of symptom are more severe in moderate climates and less severe in warmer environments.

Cultural control The use of certified virus-tested (and found to be free of all known viruses) propagation material has dramatically decreased the incidence of these diseases.