Dead branch beyond the swollen canker. 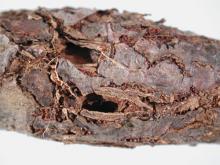 Round, red perithecia can be seen on this Liberty apple branch which will discharge spores in the second winter and spring.
Melodie Putnam, 2010.

Cause Neonectria ditissima (formerly Nectria galligena), a fungus. The disease is found primarily in high-rainfall areas along the coast and Willamette Valley and rarely in southern, central, or eastern Oregon. It has also been reported in western WA but not in Idaho. The canker is perennial. White fungal structures (sporodochia) appear on the canker either the first spring after infection or the next fall and winter. Round, red fungus bodies (perithecia) discharge another type of spore during the second winter and spring. Infection occurs during fall rains primarily through leaf scars but can also get in through wounds, pruning cuts, or where a young twig or branch has broken off. It has been suggested that the disease is a problem in locations where it rains more than 30% of the days of the month and there are at least 8 hours of temperatures between 52°F to 60°F.

Symptoms Elliptical, sunken areas that are dark reddish-brown occur on year-old twigs around leaf scars. If or when girdled, the areas beyond the infection wilt and die. On older wood, infections look similar the first year but a callus forms around the infected area. The next year, the fungus invades and kills the new callus of the previous year. The result is a series of concentric calluses, one of which grows in the healthy tissue at the extreme margin of the canker each year. Cankers have a zonate appearance. The outer ring of the canker is irregular and roughened by cracks in the bark. Cankers can also be associated with various wounds such as from pruning.

This fungus can also infect fruit, causing the disease known as eye rot on the calyx end and bull's-eye rot at the lenticels similar to anthracnose and perennial canker.

Chemical control Spray before fall rains for fruit rot control and during early, and again at mid to late, leaf fall for canker control. Fungicides protect leaf scars. May not be effective if not done in conjunction with canker removal.