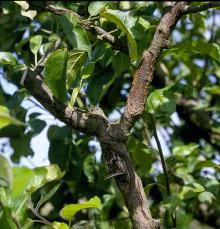 Several cankers in this tree. Numerous fruiting bodies can be found in the infected bark tissue.
Photo by Jay W. Pscheidt, 2000.

Cankers on side of this 'Golden Delicious' branch. Note how the bark becomes detached. Numerous fruiting bodies can be found in this bark tissue.
Photo by Jay W. Pscheidt, 2000. 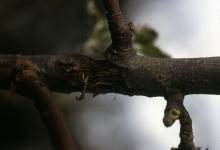 Note the stringy bark around the cankered area on this apple branch.

Cause Cryptosporiopsis curvispora: (sexual: Neofabraea malicorticis) is the most common fungus while N. vagabunda (formerly N. alba) and C. kienholzii have also been found in western Washington. The disease is severe in the high-rainfall apple-growing areas west of the Cascade Range and coastal British Columbia. The fungus causes cankers on twigs and branches and a fruit rot commonly known as "bull's-eye rot." Fall rains spread fungal spores from limb cankers to maturing fruit and to young limbs and twigs. Risk of fruit infection that develops post-harvest increases 8 weeks before harvest.

Infection occurs in the fall, but cankers will not appear until spring. Infection may also occur in the spring but trees are more susceptible in the fall. Small injuries may facilitate penetration, but the fungus can penetrate uninjured bark. The canker grows actively only 1 year; however, the fungus continues to live 2 or 3 years in the dead canker tissue and produces large numbers of spores. Old infected orchards and nursery stock can be sources of this disease. Other hosts such as crabapples, most pome and stone fruit, Amelanchier, hawthorn, and mountain ash may be sources if close to an orchard. All apple cultivars are susceptible; Spartan, Gala, Melrose, and Akane are highly susceptible.

Symptoms Cankers are most abundant on smaller branches but may be on larger limbs or on trunks of young trees. Complete girdling often results if more than one canker is on a limb.

The first apparent sign of an infection is the formation of a small, circular, reddish brown spot on the bark extending to the underlying tissues. Development of these cankers is arrested during winter. The canker expands most rapidly along the branch in spring. The cankers cease to extend and a well-marked crack forms, delimiting the canker from the surrounding healthy tissue. The surface of the canker becomes shrunken and shriveled as surrounding tissue continues to grow during the summer. The dead tissue gradually disintegrates and falls out. All that remains of it may cling to the wound for several years, forming "fiddle strings" longitudinally across the face of the canker.

During summer, numerous little pustules (acervuli) appear on the canker's surface, first at the center of the area and later out to its margin. Fungus spores mature in late summer and early fall and are scattered by rain and wind. Cankers 1 year old or more will not enlarge but are a source of fungus spores. Cankers caused by perennial canker are similar but enlarge each year.

The fruit or bull's-eye rot phase of the disease shows first as brown, depressed, circular spots in storage. As a spot extends, fungus fruiting bodies (acervuli) develop in its center, often in concentric rings, which gives the name "bull's-eye" to the rot.

Cultural control Aggressive scouting for and removal of cankers is the key to long term control. Whole tree removal is recommended in British Columbia when cankers are found.

Chemical control Must be combined with canker removal to be effective. Relying on chemical control alone has not been successful in British Columbia.