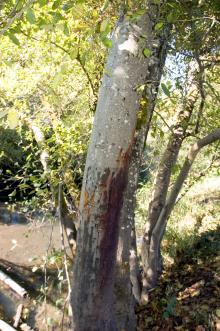 Dark staining on the trunk indicates where the fungus has colonized the tree. 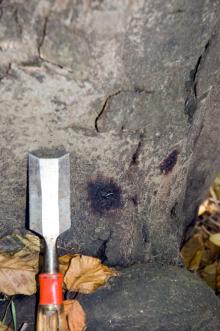 Cause The oomycete Phytophthora siskiyouensis has been found on Alnus rubra (red alder) and A. rhombifolia (white alder) in southwestern Oregon, the Willamette Valley drainage area and in the coastal range. Infected trees are generally located in areas that are subject to flooding and/or high traffic areas with compacted soil. Saturated soils, due to rain or overwatering, favor the disease. Italian alder trees (A. cordata) have been found infected in northwest California. Tanoak (Notholithocarpus densiflorus) and myrtlewood (Umbellularia californica) are also hosts for this organism.

Symptoms Cankers generally arise from the root base or near the soil line. Trunks appear to have several small spots or large areas with bleeding lesions. These spots and patches on the bark are dark-brown-to-black, below these are reddish-to-dark-brown stains from oozing fluids. Cracks in the bark may also accompany these bleeding cankers. The vascular cambium below the bark is cinnamon to dark brown. Trees with large cankers may also show canopy dieback, but trees with cankers, even large ones, may have no apparent canopy symptoms. May be confused with Nectria canker. (Similar cankers occur on tanoak and blighted shoots occur on myrtlewood.)

Chemical control There are no fungicides specifically registered for disease on this this crop. However, several fungicides such as Aliette, Alude, Fosphite, Mefenoxam or Subdue may be effective if not phytotoxic to the plants. Fungicides work best when used as a protectant in combination with cultural controls.