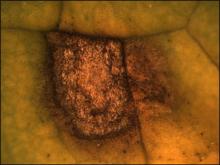 A close-up of white leaf spot.

Cause The fungus, Neopseudocercosporella capsellae (formerly Pseudocercosporella capsellae, sexual stage: Mycosphaerella capsellae), has been observed in various Brassica seed crops in Oregon. It has been reported in oilseed rape in the United Kingdom and Canada. Pod losses of 15% have been reported in Europe. Turnip, Chinese cabbage, mustards and oilseed rape are thought to be more susceptible than cabbage, cauliflower, broccoli and other vegetable Brassica species. Horseradish and radish are susceptible to white leaf spot as well as weedy types such as wild radish, wild mustard, and shepherd's purse. Turnip seed fields have had severe disease outbreaks in western Oregon, but severity will depend on weather and disease management practices.

The fungus survives via the sexual stage or as dense mycelium on infected plant residues; in some regions, the sexual stage that results in ascospores is absent. Ascospores develop on infected Brassica or Raphanus residues during the autumn and possibly winter or spring months; these ascospores are wind-dispersed relatively long distances following rain or dew events. After a successful infection, asexual spores (conidia) subsequently develop in the leaf spots and are spread relatively short distances by rain or splashing water, causing secondary spread, including pod and seed infections. Seed transmission has not been reported to play a major role in disease outbreaks; infected crop residues are usually necessary for large-scale outbreaks, but seed transmission can lead to introduction of disease into new areas. Temperatures of 50°F to 60°F with moist conditions (rain, dew, or irrigation) promote disease development. Conidia can directly infect the plant or through stomata when ambient temperatures are between 46ºF and 82ºF (68ºF to 75ºF being optimum) and under moist conditions that provide 100% relative humidity and a minimum of eight hours of leaf wetness. Leaf spots are apparent after 6 to 8 days at 59ºF to 68ºF.