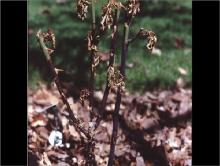 Note that the new buds pushed out but then collapsed.
Krishna Mohan. 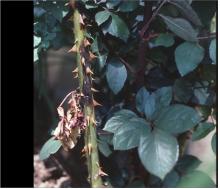 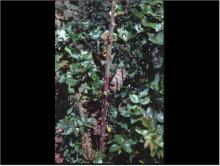 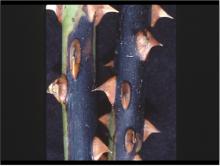 Cause An undetermined pathovar of Pseudomonas syringae, a bacterium. This disease is different from the various symptoms on roses previously attributed to P. syringae and/or P. syringae pv. morsprunorum in the literature. An aggressive cane blight has been observed in the Treasure Valley of Idaho since 1996. Symptoms were common under cool, wet conditions in spring (March to May) and the level of incidence and severity of the disease varied from year to year. Several cultivars of climbing, floribunda, grandiflora, hybrid tea, hybrid perpetual, miniature and shrub roses can show severe symptoms.

Symptoms The symptoms usually started at the base of a vegetative bud or at leaf scars or wounds, as reddish-brown areas on the bark that later turn dark-purple-to-black and necrotic. The necrotic areas expanded around and along the cane, often involving a major part or even the entire cane. Vegetative buds on the affected parts of the cane turned brown and dried. The surface of the necrotic areas of the bark was glossy, and the tissue beneath the epidermis was brown to dark brown, and moist in the early stages. Often confused with winter injury.

Cultural control The following is suggested in the absence of specific research to control this problem.

Chemical control Spray before fall rains begin and again when half the leaves have fallen. Repeat in spring to protect new growth.

Products available for commercial use: