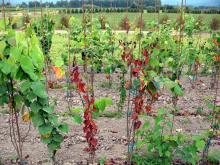 Not every tree will show symptoms of verticillium wilt. 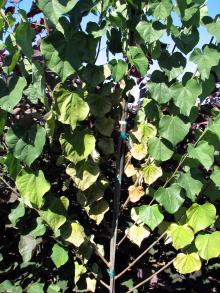 Symptoms of Verticillium wilt may be very subtle on lower older leaves. 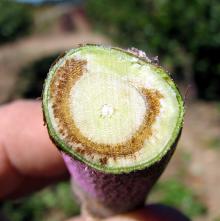 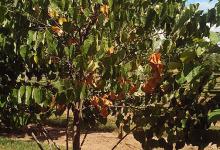 Symptoms of Verticillium wilt on redbud.
Photo by Rich Regan, 2002.

Cause Only Verticillium dahliae has been isolated from infected Cercis species located throughout Oregon. Older reports often misidentify the pathogen as V. albo-atrum, another closely-related soilborne pathogen. The two fungi have since been separated as different species. Verticillium dahliae produces discrete clusters of thick-walled melanized cells called microsclerotia while V. albo-atrum only produces thick-walled, melanized hyphae. All Cercis species tested, including C. canadensis, C. chinensis, C. occidentalis, and C. siliquastrum are susceptible. Many other plant species including weeds, other woody plants, and cover crops are also susceptible and can increase fungal survival and dispersal.

This is a soilborne fungus that infects trees through the roots. Microsclerotia in the soil germinate and infect roots. Once roots have become infected, the pathogen colonizes the xylem through mycelial growth and conidial production. Conidia are carried quickly through the sapstream thus spreading the infection throughout the plant. Eventually, conidia lodge and germinate, plugging the xylem and blocking water movement. This results in wilt symptoms. Xylem function is further compromised when the fungus produces toxins that kill nearby plant tissues leading to an intensification of wilt. Microsclerotia are formed in dying plant tissues. Wood chips from infected trees can transmit the disease as well as fallen leaves. Once in the soil they can survive for years.

Symptoms Symptoms initially appear as leaf wilting, chlorosis, and scorch. Affected branches may be scattered throughout the tree canopy or they may occur on only one side. As symptoms progress, branch dieback occurs and entire branches may be killed. If infection is severe, the entire tree may wilt and suddenly die. Dead leaves either remain hanging on affected branches or defoliate soon after wilting. Often, dark brown-orangish streaks can be observed in the sapwood. Infected trees may die within a few weeks or live for years with a chronic reoccurrence of symptoms.

Sampling Send soil samples or symptomatic plant tissues to any of various private and public laboratories to assay for V. dahliae propagules. Core samples taken from soil adjacent to infected plants have the greatest likelihood of testing positive for the pathogen. However, make sure that the laboratory is testing only for V. dahliae and not for both V. dahliae and V. albo-atrum together, which would give an inflated view of risk. Nurseries may wish to test individual core samples to determine the distribution in a particular field. The presence of any microsclerotia in the soil should be interpreted as a potential risk.

Chemical control Preplant fumigation may be helpful for nursery production. Fungicides are not considered effective to cure infected trees.