A cut with a pocket knife reveals the discolored cambium where this fungus has been active. 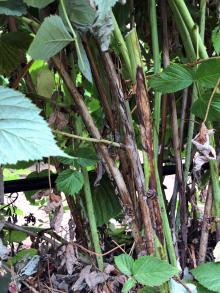 Lesion has started with vascular discoloration.

Lesions of cane blight on this 'Munger' black raspberry.

Cause Kalmusia coniothyrium (formerly Leptosphaeria coniothyrium), a fungus that overwinters on old cane stubs and near wounds on infected fruiting canes. Cane blight may weaken fruiting canes of red raspberry. It may attack black raspberry at points where canes have been snapped off or pruned to force lateral growth. 'Boysenberry', 'Loganberry', and 'Youngberry' canes are seldom infected with cane blight unless canes first are frozen, pruned, or mechanically damaged. This pathogen is a wound invader. Wounds from the fruit-catching plates of mechanical harvesters have resulted in primocane infections. Cane blight rarely is a problem in hand-harvested fields. Rain or overhead irrigation during harvest has increased disease incidence because spores are disseminated in splashing water. Young canes are more rapidly infected while older canes of raspberry are more resistant to infection in the fall.

Symptoms Symptoms beyond the wound do not appear on the canes until fall or during the fruiting year. The fungus invades through wounds such as from a mechanical harvester or, on some red cultivars, yellow rust lesions near the ground. The infected area flattens and may crack open. Infected canes are easily broken at the wound due to cellulose degradation by the fungus. Severely infected canes often are girdled. In floricane-fruiting raspberries, primocane infections can lead to girdling of the following season's floricanes causing poor fruit development, wilting, and early death of floricanes ending in significant yield losses.

Diagnostic lesions are internal. Scrape the affected cane with a knife to expose vascular tissue. Healthy tissue should be moist and light green; the canker will be orangish-red. Vascular discoloration generally extends above and below the external wound.

Chemical control Direct spray to the cane's base during or immediately after harvest or after pruning.