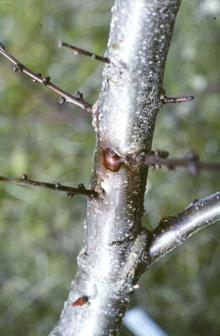 Gumming is often associated with this canker disease.
Photo by Ralph S. Byther

Cause Pseudomonas syringae pv. syringae, a bacterium. Although the bacteria survive on the outside of the plant they must get inside and multiply in the space between plant cells (apoplast) to cause disease. These pathogenic bacteria inject several proteins and small-molecule toxins to get past host immune mechanisms. Once inside, the bacteria induce a watery, nutrient rich environment between the plant cells where they can multiply and continue colonization of the plant tissues. Bacteria also produce a protein that acts as an ice nucleus, increasing frost wounds that bacteria easily colonize and expand. Factors that weaken or injure the tree predispose it to developing cankers. Factors include wounds, frost damage, early pruning, soil pH, poor nutrition, and infection by other pathogens including Verticillium, Nectria, and nematodes. Sources of bacteria include old cankers, healthy buds, systemically within trees (with or without cankers), as epiphytes on leaf surfaces, weeds, grasses, and even soil. Wind, rain, insects, infected bud wood, and infected nursery stock can spread bacteria.

'Italian Prune' trees on peach seedling rootstock had half as many trunk cankers as trees on plum rootstocks. Pseudomonas infection was very severe on trees with Prunus tomentosa rootstock. French prune trees have been shown to be less susceptible on Lovell peach rootstock. Field-budded rootstocks or budding 3 feet above the root crown also helped reduce the incidence of bacterial canker on French prunes.

Symptoms The most conspicuous symptoms are cankers, gum exudation, and dieback of girdled branches. Dead buds and leaf spots also can occur. In most cases, heavy gumming is associated with bacterial canker formation on branches and twigs. Gumming occurs at the cankers' margins. Other problems can lead to gumming {see Cherry (Prunus spp. - Gumming)}.