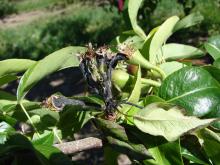 When vigorously growing shoots die from fire blight the tip turns down to form the Shepard's crook symptom. 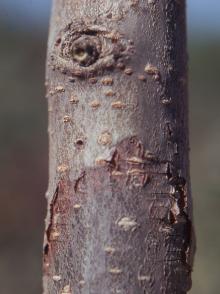 Hold over canker on a pear branch. These can be difficult to see on smaller branches. 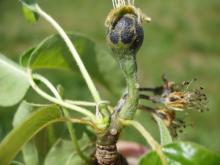 Black lesions on the young fruit and bacteria oozing from the base of the spur.
David Sugar. 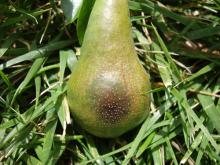 Cause Erwinia amylovora, a bacterium that overwinters in cankers on infected pear, apple, and some ornamental trees. Risk of infection increases with the number of more active "holdover" cankers in an orchard. Insects, pruning tools, and splashing rains spread this bacterium. Bacteria enter healthy, main bloom or rattail blossoms through the stigma, nectary, anthers, and sepals. A temperature of 65°F or higher in a 24-hour period plus a trace of rain or high humidity (greater than 65%) is necessary for infection. Flowers, which are open for up to 3 days, support rapid growth of the bacteria while older flowers do not. Vigorously growing shoot tips, young leaves, and wounds also can be infection sites. Entrance into healthy appearing leaves and shoots may be through the base of epidermal hairs. Symptomless pears are not a source of the pathogen, which is rarely detected (1 out of 5,600 fruit) as an epiphyte on commercially-produced fruit.

Primary insect vectors include ants, flies, and wasps. Aphids, flies, ants, leafhoppers and tarnished plant bugs have been implicated In the spread of fire blight. Flies and ants are attracted to the bacterial ooze and can then carry it to uninfected blossoms. Bees do not feed on bacterial ooze but can visit infected flowers and spread bacteria to uninfected flowers.

All important pear cultivars are susceptible to fire blight, including Bosc. Fire blight also severely attacks apple, cotoneaster, photinia, pyracantha, hawthorn, quince, and mountain ash. Fire blight may be very serious some years but appears hardly at all in others. It is sporadic in Milton Freewater, Hood River, and Medford, OR and in Yakima and Wenatchee, WA. Since the mid-1990s, the disease has become very important to apple growers because susceptible cultivars have been planted widely. It is not common in Oregon's Willamette Valley and may be confused there with Pseudomonas blight. In a "fire blight year," young trees, especially those trained to a central leader, can be severely damaged.

Cultural control This disease can cause serious losses and all personnel from growers to extension agents should have a full understanding of management tactics and apply them rigorously. Use an integration of many tactics, from sanitation to timely application of chemical to biological products, to manage this disease.

Forecasting Many systems have been developed to help growers determine when weather conditions have been, are, or will be conducive to fire blight development. Some are fairly simple, others are more complex. Each one involves measuring air temperature and humidity or rainfall. A temperature-based system, called Cougarblight, was developed in Washington and is the best one for use in the PNW. Sprays are initiated from 150 to more than 500 degree-hours depending on the proximity of known sources of fire blight.

The Illinois system, developed in the 1960s, calculates degree-days; that is, the number of degrees above 65°F between the latest prebloom freeze and the early bloom period. (For example, if the maximum temperature for one day is 75°F, that equals 10 degree-days.) A total of 30 degree-days and the prediction of warm (70°F to 80°F), wet weather initiates the first spray. Observations in Medford, OR indicated a trigger of 25 degree-days was more accurate under Rogue Valley conditions.

Chemical control Integration of chemical and biological tactics has worked well in the PNW. Keeping bacterial populations low during bloom, with various products and timing antibiotic applications to coincide with infection periods, has been a successful strategy in the PNW. Use a delayed dormant application of a copper-based product if fire blight was active in your orchard last year. Use biological materials as trees go into bloom and again at full bloom supplemented with an antibiotic. Use antibiotics when infection periods are detected with the Cougarblight program. Continue with an antibiotic program during rat tail bloom (also called second bloom or scattered bloom).

Notes Group P7 fungicides such as Aliette WDG and Rampart and ReLoad (or Organocide Plant Doctor for the home)are registered for apple and pear and Aliette WDG and Alude are registered for ornamental pears, but these products are not recommended as foliar applications because control is too variable and the materials are not compatible with copper products. Trunk injection of a similar product was better than nothing in Michigan but has not been evaluated in the PNW.

Vacciplant is registered but was ineffective in the PNW and thus is not recommend for use.

Some registered products offer only suppression of this disease and thus are not recommended for use. These products include DoubleNickel 55 and Regalia.

Biological control Use in conjunction with other control tactics such as thorough sanitation and antibiotics. Use only after the use of lime sulfur products.