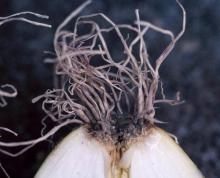 Cause Fusarium oxysporum f. sp. cepae is a soilborne fungus that can affect onion and other Allium spp. The fungus survives a long time in soil. Infection often is associated with pink root, maggots, or other insect injury.

Symptoms Bulbs may become infected at any point during their time in the field. Yellowing and browning of leaves begins at the tip and moves down. Plants exhibit weak growth and may wilt. Red-brown rot appears where roots are attached to the basal plate. Rot and discoloration usually affect the entire base and up into the bulb scales; affected tissue appears brown and watery when bulbs are cut open. Sometimes, a white moldy growth develops on the stem plate or between affected scales. Bulbs may appear normal at harvest, but rot may progress in storage.