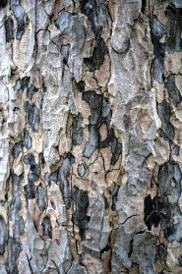 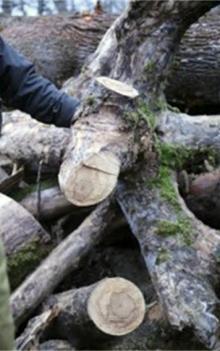 Another low resolution image showing that trees may have a greenish-brown-to-greenish-yellow stain of the wood that can be seen when an infected branch is cut into cross-section.

Cause The fungus Cryptostroma corticale has been causing dieback primarily in sycamore maples (Acer pseudoplatanus), although several other species can also become infected. The disease has been found in eastern WA for many years and recently in the Seattle area on sycamore maple, red maple (Acer rubrum), Japanese maple (A. palmatum) and big leaf maple (A. macrophyllum). Pacific dogwood (Cornus nuttallii) and horsechestnut (Aesculus hippocastanum) have been confirmed as hosts in the Pacific Northwest.

The fungus is thought to infect and kill small, inconspicuous branches, then spreads into the heartwood where it continues to proliferate up and down the tree. Pruning wounds may also be infected. The rate of growth of the fungus is greater at higher temperatures and is more rapid in an infected tree when the summers are hot. The fungus can grow quickly within the tree if it has been stressed by drought, particularly if multiple years of water stress have occurred. With high temperatures, the fungus grows rapidly from the center of the tree out toward the bark. The fungus kills the bark, causing it to blister. Dark gray masses that blacken with age, stomata, are formed pushing up the bark. These stomata resemble soot, hence the name sooty bark disease. Once spores are dispersed by wind, the remaining tissue beneath them looks black. Some trees may be infected but show no outward symptoms.

The disease is not found in coastal or high elevation areas of Germany that are cooler and rainier than other areas.

The spores may cause a severe reaction in susceptible people, which has been a problem for those working around diseased maples, such as arborists and loggers. In humans it is called maple bark disease causing a hypersensitive pneumonitis with symptoms similar to COPD.

Symptoms An infected tree may have numerous small dead twigs that line up one side of the trunk, or small cankers on the trunk. Heavily infected trees may have leaves that wilt over part or all of the canopy. Epicormic shoots may also be produced. Spore production in the bark periderm just under the epidermis results in bark blisters. The bark cracks or sloughs away exposing dark patches of the dark brown to black fungal stroma and powdery black spores. Trees may have a greenish-brown-to-greenish-yellow stain of the wood (soft rot) that can be seen when an infected branch is cut into cross-section. This soft rot is due to lignin degradation and can go into the roots. The staining is in a single column, not streaky, as occurs with Verticillium wilt. Tree mortality soon follows after signs of the disease appear.

May be confused with Stegonsporium pyriforme (also found on big leaf maple in WA) which produces smaller black spots rather than a black layer.

Cultural control Arborists should wear PPE to keep spores out of their eyes and respiratory system when removing trees.

References Braun, M., Klingelhöfer, D. and Groneberg, D. A., 2021. Sooty bark disease of maples: the risk for hypersensitivity pneumonitis by fungal spores not only for woodman. Journal of Occupational Medicine and Toxicology, 16:1-7.