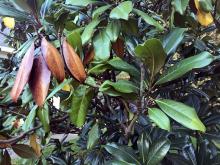 Dieback of shoots in this magnolia tree due to Pseudomonas syringae.

Note the necrotic, angular lesions on the leaf.

Cause Pseudomonas syringae pv. syringae, a bacterium favored by cool, wet weather in spring. It is found on almost all plants and causes a wide variety of diseases. Although the bacteria survive on the outside of the plant they must get inside and multiply in the space between plant cells (apoplast) to cause disease. These pathogenic bacteria inject several proteins and small-molecule toxins to get past host immune mechanisms. Once inside, the bacteria induce a watery, nutrient rich environment between the plant cells where they can multiply and continue colonization of the plant tissues. Bacteria also produce a protein that acts as an ice nucleus, increasing frost wounds that bacteria easily colonize and expand. Twig dieback has also been associated with old pruning wounds.

Symptoms New shoots wilt, become necrotic, and die back in spring. Dead, necrotic leaves may remain attached to the shoot after the branches die back. Large, dark, irregular spots also may be on leaves and have been reported on flowers. Leaf spots are small, dark brown, water soaked, and often surrounded by a yellow halo. Spots enlarge and may be limited by leaf veins becoming angular in shape.

Chemical control In British Columbia, apply copper-based bactericides at least once in fall and twice in spring near budbreak. Bacteria resistant to copper products and antibiotics have been found in Pacific Northwest nurseries.