Lawn and Turf-Fairy Ring and Mushrooms 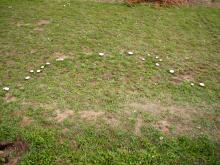 Note the semi circle of mushrooms coming up in this sparse turf area. 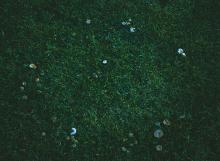 Note the circle of mushrooms in this lawn.

A ring of mushrooms may be associated with living trees or places trees once stood.

Cause Nearly 60 different species of basidomycete fungi have been implicated in fairy rings including species of Agraricales and Gastromycetales, mostly in the genera Agaricus, Calvatia, Chlorophyllum, Clitocybe, Lepiota, Lycoperdon, Marasmius, Scleroderma, and Tricholoma. Some may be poisonous. They decompose organic matter such as dead tree roots and bark mulch. Fairy rings are more severe on sandy soils, where fertility is low, and when drought is common. Necrotic grass is most commonly an artifact of drought-stressed turf, caused by a combination of dense fungal mycelium and the production of organic acids that coat sand particles and render the underlying soil hydrophobic. All grasses are affected. The problem is common in Oregon, Washington, and northern Idaho.

Symptoms Rings or semicircles of dark green grass, which expand outward over several years. Mushrooms or puffballs may grow out of the green zone. Dead grass sometimes is inside the ring adjacent to the ring of dark green grass. It is possible for fairy rings to grow into and then through and out of a turf area. Fairy rings are of minor importance in home lawns.

Chemical control Not generally recommended because it is difficult to disperse chemical effectively throughout the soil. Curative suppression with fungicides has been marginal due to the water-repellent nature of the infested soil. Success is limited, and results may be erratic. Mixing with soil surfactants has helped. Preventative applications were useful in North Carolina but efficacy in the PNW is unknown.