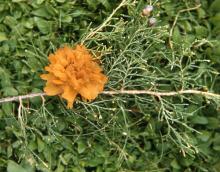 Cedar apple rust is rare in the PNW and more likely due to other species of rust.

Cause Several fungi in the genus Gymnosporangium cause rusts on juniper and members of the rose family such as serviceberry and pear. Seven different species are reported from Oregon, nine from Washington, and six from Idaho. Gymnosporangium bethelii, G. harknessianum, G. kernianum, and G. nelsonii have been reported on J. occidentalis (California juniper) in Oregon. Spore stages produced on junipers infect only members of the rose family in early spring over a 2- to 3-year period. The spore stages produced on serviceberry, pear, or others in the rose family only infect junipers during the course of one summer.

Cedar apple rust is common east of the Rockies on J. virginiana. In the West, it is rare on J. virginiana and J. scopulorum. Galls on juniper in the West are more likely due to other species of rust.

Cultural control To prevent juniper infection, remove Rosaceous hosts from the vicinity, or remove infected leaves from them before they begin to sporulate in mid- to late summer.

Chemical control Apply when spores are being shed from the Rosaceous host.