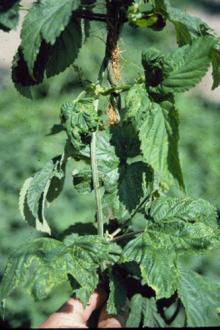 Note the chlorotic (yellowish) areas, as well as distortion and upward curling of the leaf margins.
Photo by C. B. Skotland 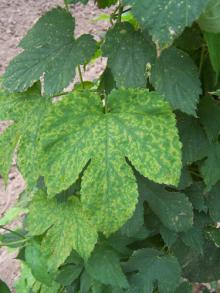 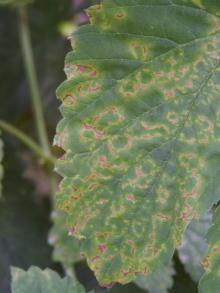 Cause Hop latent virus (HpLV), American hop latent virus (AHLV), Hop mosaic virus (HpMV), and Apple mosaic virus (ApMV) been found in Pacific Northwest hop yards. The first two produce no symptoms and no known crop loss. HpMV, a carlavirus, has not been a problem traditionally even when detected in a planting. Many varieties are tolerant to HpMV and are asymptomatic when infected; a few like 'Chinook' and 'Golding' can be very sensitive. ApMV, an ilarvirus previously known in hop as Prunus necrotic ringspot virus, can cause up to 30% loss in cone production and also decrease alpha acid levels, but ApMV effects are varietal dependent. HpLV, AHLV, and HpMV are transmitted by plant-to-plant contact and by the Damson-hop aphid (Phorodon humuli); HpMV also transmitted by the green-peach aphid, Myzus persicae. ApMV moves by plant-to-plant contact.

Symptoms HpLV- and AHLV-infected plants have no known symptoms on varieties grown in the Pacific Northwest.

HpMV-sensitive hops show a chlorotic, pale vein-banding on the leaf, which is mottled and curls down strongly. Diseased hills may survive several years but are stunted with shortened internodes and can be killed by the infection.

ApMV-symptoms depend on hop variety and virus strain, and especially rapid changes in weather. Symptoms usually are suppressed in hot weather and appear during cool weather. Consequently, symptoms may occur in leaves of a certain age but not in younger or older leaves. This is true of other plant parts as well. Foliar symptoms include chlorotic or necrotic arcs and rings or necrotic line patterns. Leaves often have a crisp and leathery texture as well and there may be curling of the leaf margins. Plants usually are stunted with shortened internodes and sidearms and may have difficulty climbing. If cool weather occurs during flowering, cone set and size may be drastically reduced.

Cultural control Exclusion is an important means of virus control.