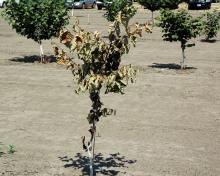 Trees seem to die randomly in the orchard during the summer. 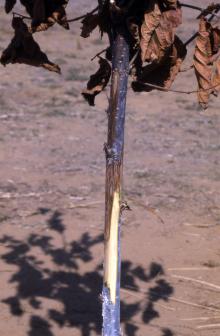 Exposed, discolored cambium originating from the top of the tree. 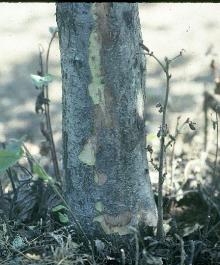 Notice the discolored cambium exposed in this picture of bacterial blight on an older tree. The canker does not go below soil line.
Photo by Jay W. Pscheidt, 1989. 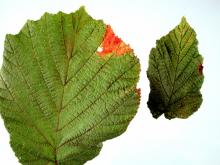 Leaf spot due to bacterial blight.

Cause Xanthomonas arboricola pv. corylina (formerly Xanthomonas campestris pv. corylina), a bacterium that attacks buds, leaves, branches, and trunks. Occasionally it attacks nuts but seldom invades roots. Tree mortality due to this disease is commonly found in orchards the first few years after planting. The most serious phase of the disease is trunk girdling and killing of trees up to 8 or 10 years old. Generally only 1- and 2-year-old twigs are attacked and killed. Rain splash or the movement of infected nursery stock spreads the bacteria. Seedborne transmission has been reported but no data is presented to support the claim. Infections are indirect, through wounds or by bacterial invasion of blighted buds and shoots of current-season growth. The disease has been associated with high stress sites and dryland production.

Symptoms Small, angular or round, yellowish green, water-soaked spots develop on leaves, later turning reddish brown. Buds may turn brown and fail to leaf out. Shoots may develop but are infected. The first infections on current-season stems consist of dark green water-soaked areas on bark, which turn reddish brown. Lesions may girdle stems and kill them. Dead leaves often cling to girdled stems a long time. Lesions or cankers may extend into the main scaffold or trunk. Use a pocket knife to determine the extent of canker development. Lesions may be wet and ooze in spring. Can be confused initially with flathead borer damage.

Chemical control Apply sprays in late August or early September before the first heavy rains. If fall rains are heavy, apply another spray when 75% of the leaves have dropped. Note that most copper products do not allow use until after harvest. Spring applications do not improve disease control over fall applications alone and spring applications alone helped a little in 2 out of 5 trials. Copper-resistant bacteria were not found among isolates collected in 2018-19 but minimize copper use so resistant bacteria do not develop.