Notice the poor shoot growth and chlorotic, cupped leaves on right side of this trunk.

This is the symptom of stunted shoot growth and cupped leaves, sometimes occuring only on one side of the vine. 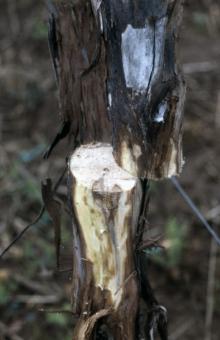 A canker is revealed in cross section and when the bark is peeled away near a large, old pruning wound. 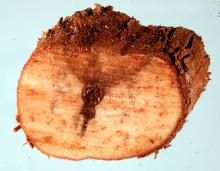 Other fungi, such as Botryosphaeria,  can cause similar cankers and wedge shaped symptoms.

Cause The fungi Eutypa lata var. lata, has been found in all areas. In addtion E. laevata has been found in Washington and E. leptoplaca has been recovered in Oregon. Up to 24 species in various genera are reported to cause this disease but E. lata is the most common. The disease is prevalent on 'Concord' vines in eastern Washington but also on wine grapes throughout the PNW. Symptoms are generally not noticed until year 8 when disease incidence may be about 10% but yield losses are, to this point, minor. Incidence is especially high in older vineyards where large pruning wounds were made to alter the training system. A brief preliminary survey found incidence high in non-irrigated vineyards containing old vines in southern Oregon. Moderately infected vineyards can lose 19% to 50% of yield; severely affected vineyards 62% to 94%. The disease has been observed frequently on wine grapes in the Willamette Valley of Oregon. Also, the fungus can infect cherry trees, which are heavily planted within many of the same areas and can act as a reservoir of inoculum. The fungus can attack other hosts including many orchard crops such as Prunus spp., apples, pears, and walnuts and plants gown as ornamentals, or in riparian areas, such as big leaf maple, and willow.

E. leptoplaca, has been found in vineyards of northern California. Isolates of this fungus collected from California bay laurel and bigleaf maple trees adjacent to vineyards were found to cause disease in grapevines when inoculated.

Ascospores are released from perithecia in infected wood during rain events and may be carried long distances on air currents. Ascospores are discharged after 2 hours of rainfall and are released for 36 hours at which time perithecia are depleted of available ascospores. New mature ascospore are available for release after 12 more days. Infection occurs when airborne ascospores contact fresh pruning wounds during or immediately following rain. Pruning wounds become resistant to infection about 2 to 4 weeks after pruning. In general, pruning wounds made early in the dormant period are much more susceptible than wounds made late in the dormant period. Although water stressed vines are more susceptible to infection, subsequent colonization of the vine is more limited.

Cultivar susceptibility is dependent on various evaluation systems and high variability. One study found the number of inoculated spurs to be 72% for Grenache and 47% for Pinot Noir but the rate of stain spread was significantly higher for Pinot Noir. Cabernet Sauvignon was similar to Pinot Noir and Merlot had the least number of spurs infected and lowest rate of stain spread. Differences in susceptibility may also be due to reaction of the foliage to translocated toxins which is only produced by one species, E. lata.

Symptoms Stunted spring shoot growth, yellowed and cupped newly emerged leaves, shed blossom clusters, vascular discoloration, and cankers in stems associated with old pruning wounds. In advanced stages, part or all of a vine dies. Symptoms are best seen in spring when healthy grapevine shoots are 10 to 15 inches long. Later in the season, affected shoots are stunted, and leaves become tattered and scorched. Clusters on infected shoots are poorly developed and often wither and drop. Infected vine foliage may be covered and masked by the foliage of healthy grapevines. Experience in Australia has shown that foliar symptoms may be variable from year to year, especially in 'Shiraz'. It is also common to find one side of a vine dead or with disease symptoms and the other side apparently healthy. Symptoms may not appear on diseased vines for more than 3 years after infection.

Cankers expand lengthwise in both directions from the wound and girdle and kill cordons or trunks of infected vines in 5 to 10 years. Removal of the bark will expose the extent of the canker. When cut in cross section, cankers may show wedge-shaped discoloration where the widest part is near the outside of the trunk or cordon and the thinnest part near the center. This symptom can be produced by several other grapevine trunk disease fungi such as Botryosphaeria.

Cultural control Preventative tactics are more effective when started early in the life of a vineyard.

Chemical control Useful when pruning a new planting or retraining vines and making large trunk or cordon cuts. Tank mixes with products from different FRAC groups has also been helpful.

Biological control Use in conjunction with cultural control tactics such as thorough sanitation. Trichoderma sp. have been shown to help protect pruning wounds, basal ends of propagation material, and graft unions before infection. Use within 24 hr of pruning.