Top side of leaf (left) with chlorotic spot sometimes called an "oil spot" and a similar lesion on the underside of the leaf (right) with the white sporulation of downy mildew. 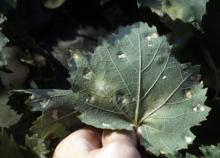 There are numerous white areas on this leaf, but most of these are due to the grape erineum mite. Erineum mite damage is often confused with downy mildew. The larger, whitish more diffuse area on the right-side of the leaf is downy mildew. 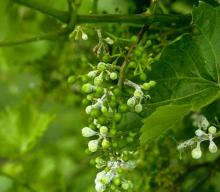 Notice the white, downy appearance of infections on the berries
Photo by Ed Hellman, OSU

Early infection due to downy mildew can destroy grape clusters. 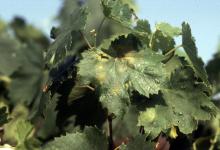 Notice the chlorotic spots on the upper-surface of the leaves.

Cause The fungus-like organism Plasmopara viticola has not been reported from grape in the Pacific Northwest, but the disease has been reported from at least seven California counties. One OSU Plant Clinic specimen from a home garden was diagnosed with downy mildew in 1966. Several clades (like forma species) of the fungus have been identified with P.v. clade aestivalis encountered the most in Eastern North America. The clade (also called Plasmopara muralis) found on Boston ivy or Virginia creeper does not infect grape and vice versa. The organism was detected on Boston ivy plants in Oregon in 2001. One landscape planting of Boston ivy without overhead irrigation had symptoms of the disease. This may indicate that western Oregon can sustain natural spread and expression of this disease.

Spring weather west of the Cascade Range would be highly conducive to disease development if the pathogen ever is introduced into grape vineyards. It can be spread by transporting infected vines or nursery stock or within plant debris or soil that contains oospores of the organism. The organism can overwinter or be transmitted as mycelium in dormant buds.

Symptoms Lesions can be on any green part of the vine. Lesions are yellowish and oily or angular, yellow to reddish brown, and limited by veins. In moist weather, a delicate dense, white growth is on the leaf underside opposite lesions seen on the upper side. Severely infected leaves drop, and vines may show premature defoliation. Shoot tips can die back; immature berries are highly susceptible. Symptoms may be easily confused with the grape erineum mite damage, which produces a puckered area with numerous white trichomes (that later turns darker) on the undersides of leaves.

Cultural control Quarantine and scouting are the best ways to keep it out of vineyards.