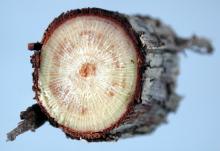 Viewing trunks in cross-section, dark brown to black streaking is evident in the vascular elements due to plugging of individual or aggregates of xylem vessels with amber to black gum (gummosis) and formation of tyloses.

Cause This root disease has been found more frequently during the 2010s in the Pacific Northwest. Many different soilborne fungi have been reported to cause this disease including 24 species in these genera; Dactylonectria, Ilyonectria, Neonectria and Thelonectria (Cylindrocarpon-like fungi); Campylocarpon and Cylindrocladriella. In the PNW, Ilyonectria destructans (formerly C. destructans) and Neonectria obtusispora (formerly C. obtusisporum) have been found in association with declining young vines, but the disease has not been thoroughly investigated. Surveys in British Columbia found 5 fungal species associated with this disease; Ilyonectria liriodendri and I. macrodidyma were the most prevalent.

Vines derived from infected mother plants are thought to be a significant means by which disease is introduced into a vineyard. However, vineyard soils that have been in grapes previously may already contain the pathogens. Cylindrocarpon-like fungi invade through wounds or natural openings in roots and below-ground stem pieces. Poor conditions during cold storage and transport of nursery stock can result in stress; cross-contamination from infected to healthy material can occur at these times.

Viewing trunks of declining grapevines in cross-section, dark brown to black streaking is evident in the vascular elements due to plugging of individual or aggregates of xylem vessels with amber to black gum (gummosis) and formation of tyloses. Necrosis extending from the bark to the pith is characteristic of black foot disease.

Physical injuries to the grapevine due to root tearing, disbudding, or other trauma during production or planting can result in phenolic depositions and black discoloration, or even outright death of tissue as the result of injury to cambium tissues.

Symptoms of young vine decline resemble other important diseases of grape including uneven wood maturity as in Pierce's disease, virus-induced incompatibility, esca or black measles, and some nutrient deficiencies.

Cultural control Management starts with preventive practices in nursery mother blocks and propagation beds. Good management techniques, which include proper planting, irrigation, and fertility for young vines while avoiding devigorating stresses, both before and after planting, are very important for establishing a healthy and productive vineyard.

Chemical control Chemical strategies to control these pathogens are difficult, as traditional techniques used for the control of surface pathogens do not penetrate dormant grapevine cuttings sufficiently to control fungi inhabiting the vascular system. Soaking infected dormant cuttings or vines in fungicides before grafting or planting has reduced disease incidence and severity but none are registered for this use.

Biological control Use in conjunction with other control tactics such as thorough sanitation. Trichoderma sp. have been shown to help protect pruning wounds, basal ends of propagation material and graft unions before infection.