Blueberry Mosaic Virus symptoms may just be green and yellow patchy mottling of the leaves.

Scorch on the cultivar 'Elliott'.

The branch on the left side shows both the initial shock symptom but it also recovering with new growth. 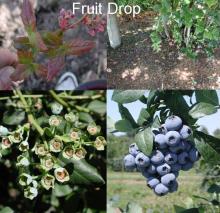 The bushes with the fruit-drop problem are not laden with fruit and are upright in this photo.

A premature fruit-drop symptom was observed in several 'Bluecrop' blueberry fields in Oregon, Washington and British Columbia around 2004. The plants flower normally, though the young leaves and flowers have a transient red coloration that is absent in healthy plants. The fruit develops to 3 to 5 mm in diameter and then aborts so that affected bushes have virtually no fruit at harvest. The incidence within fields increases year-to-year suggesting that a pathogen is involved. Late summer of 2013, a virus was associated with this disease, but only a limited number of plants have been tested. Symptomatic plants from 3 fields in BC and northern Washington have tested positive for the virus and asymptomatic plants have tested negative. At this time it is not known if other cultivars of blueberry are symptomless, resistant or simply not infected with this virus.

Blueberry latent virus is of little concern since it is symptomless in single infections and does not have adverse effects when co-infecting with other viruses in mixed infections.

Blueberry mosaic-light green, yellow, and sometimes pink and white patchy mottling on leaves. Symptoms may be irregularly distributed on an infected plant and may show some years but not others. Symptoms are dramatic in 'Regita'. Fruit is reduced in quantity and quality and may ripen late. Blueberry mosaic spreads slowly in the field by unknown means. No resistant cultivars are known. This disease is of relatively little concern. All cultivars are self-indicators. An Ophiovirus has been identified in plants exhibiting these symptoms and since detected in plants exhibiting mosaic symptoms in BC, OR, WA, CA, MI, NJ, AR, NC, Japan, and Slovenia. The vector of the virus has not been identified at this time.

Blueberry red ringspot-small, superficial reddish rings on canes, upper surfaces of leaves, and occasionally on fruit. Rings are most noticeable in August and September. This virus does not appear to spread naturally in the field in the Pacific Northwest, although it does so by unknown means in the Eastern States. 'Bluecrop' is resistant; 'Blueray', 'Bluetta', 'Burlington', 'Coville', 'Darrow', 'Earliblue', and 'Rubel' are susceptible. Testing for this virus is best done by PCR using recently developed primers from New Jersey. These primers can also be used to detect cranberry red ringspot in cranberry

Blueberry scorch-in spring, shoot tips die back, sometimes on only one branch of the plant. Flowers blight just as the earliest ones begin to open. May resemble symptoms caused by bacterial canker and mummy berry. There is a serological test for this virus. Infected plants repeat this symptom cycle each spring. 'Atlantic', 'Berkeley', 'Collins', 'Herbert', and 'Pemberton' are particularly susceptible, but no immune cultivars are known. Several cultivars are symptomless and are considered tolerant. The cultivars Bluecrop and Duke are tolerant but show symptoms in British Columbia where a different strain of the virus is suspected.

Blueberry shock-symptoms resemble those of the Blueberry Scorch Virus but may not reappear in spring growth in years following initial infection, although plants remain infected. This virus is spread by pollen moved by wind or bees. There is a serological test for it. The cultivars particularly susceptible are Berkeley, Bluegold, Bluetta, Duke, Liberty, Aurora, Pemberton, Reka, and Elliott are and the virus spreads rapidly through a field. In 'Bluecrop' and 'Bluejay' the virus spreads very slowly in the field. No immune cultivars are known; the virus is symptomless in some cultivars when they are newly infected. For small plantings, let the disease run its course. In larger plantings, rogue plants only if infected ones are confined to a small area; otherwise let the disease run its course. Plants that have recovered from the symptoms appear to produce a full crop, but these plants can continue to serve as an inoculum source for nearby plants and for any new plantings.

Blueberry shoestring-although it is most prevalent in Michigan and New Jersey, Blueberry shoestring virus has been detected in Washington and Oregon. Plants shipped from back east have a higher probability of being infected. Aphids spread the virus, but the vector has not been found in the Pacific Northwest. The most prominent symptoms are elongated reddish streaks on current-year and year-old stems. During flowering, some petals exhibit red streaks. Affected leaves are strap-like, curled, or crescent-shaped. Yield of infected bushes decreases greatly.

Tobacco ringspot-a necrotic ringspot on leaves. Dead spots may drop out, giving leaves a shothole or tattered appearance. Leaves may be deformed, stems die back, and stunting and slow decline leading to plant death may occur. Fruit yield and quality are severely depressed. This virus is spread in the soil by the dagger nematode (see Blueberry-Nematode, Dagger), leading to expanding circles of affected plants. There are serological tests for this virus. Most cultivars are susceptible, but Jersey is resistant to the common strain of the virus. This virus is very rare in the Pacific Northwest but has been detected in eastern WA.

Tomato ringspot-distortion, circular chlorotic lesions on leaves, and necrotic stem lesions. Shoot dieback, stunting, and plant death may eventually occur. Fruit yield and quality are severely depressed. This virus is spread in the soil by the dagger nematode (see Blueberry-Nematode, Dagger), leading to expanding circles of affected plants. Infected plants of cultivars Atlantic, Dixie, Earliblue, Olympia, and Pemberton have been identified in western Oregon where this virus was common in blueberry studies. 'Bluecrop' appears resistant in the field.