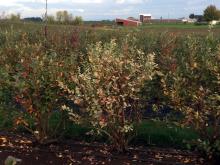 Scattered plants in field develop silvery leaves and stand out from other bushes. Sometimes called ghost plant due to the way it looks. 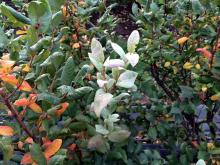 The top surface of young leaves turns silvery as the epidermis separates from the rest of the leaf. 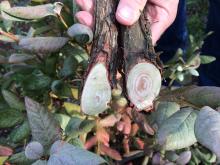 The heartwood of infected stems near the base of the bush may turn brown or exhibit purple to brown concentric rings of discoloration. 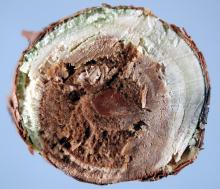 Fruiting bodies (basidiocarps) may develop in the fall on the surface of dead or dying branches. 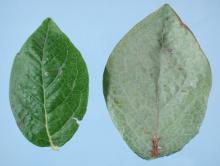 Healthy leaf on the left and silver leaf to the right on this 'Topshelf' cultivar.

Cause Silver leaf is not new to the PNW as it has been a minor problem on stone fruit for many years. It is a disease where the fungus, Chondrostereum purpureum, invades cut or wounded stems and limbs of a wide variety of plants. This fungus was confirmed for the first time in 2014 by the OSU Plant Clinic on 'Draper' and 'Liberty' blueberry with silver leaf symptoms although samples with these symptoms had been received since 2009. Symptoms of the disease have also been observed on 'Duke', and 'Topshelf'. Symptoms occur in western Oregon, northern Washington, and BC. The cultivars Brigitta and Bluecrop are susceptible in other blueberry production areas in addition to the cultivars Draper and Duke.

Silver leaf is also known to affect sweet cherries, apples, pears, peaches, plums, nectarines, some small fruits, alder, willow and poplar. The fungus is a saprophyte growing on dead trees, prunings, stumps, posts, and fallen logs. Small bracket-like fruiting bodies are produced in the fall and winter during moist weather. Spores are produced during wet weather and blown for miles. Spores germinate and enter living tissue through a fresh surface wound such as pruning cuts, mechanical injury, winter injury, and/or insect damage. Pruning cuts are most susceptible within 1 week of wounding. After infection, fungus growth is systemic into the root crown of the bush.

Symptoms During the summer the top surface of young leaves turns silvery. Symptoms may start on 1 or 2 branches, which show reduced growth and die in two or three seasons. New branches on the same plant continue to develop symptoms until the whole bush is affected. Symptoms in 'Draper' seem to begin about 3 or 4 years after planting. Reversion of symptoms has been observed for infected apple and blueberry plants grown in Chile.

The heartwood of infected stems may turn brown or exhibit purple to brown concentric rings of discoloration. This discoloration is more accentuated at the base of bushes and branches and may not be found in stem cross sections higher up on symptomatic branches. The root system does not show symptoms.

Fruiting bodies (basidiocarps) may develop in the fall on the surface of dead or dying branches. Fruiting bodies can be quite variable in form appearing either as flat incrustations up to several inches long that cover infected branches or as bracket-shaped projections, 1- to 3-inches wide, arranged in tiers. Bracket undersurfaces, the sporulating surfaces, usually are purple although color may vary from salmon pink to purple.

Chemical control Injection of fungicides into diseased trees has not had an effect on disease progression in tree fruit. Chemical protection of pruning wounds is possible but there are no chemical registrations.

Biological control The fungus Trichoderma viride has been shown to protect pruning wounds but there are no registrations.