“Flagging” of branch of a 'Duke' plant infected with Fusicoccum canker. 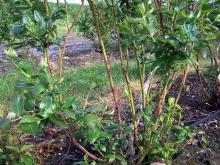 Fusicoccum canker lesions on multiple sites on young stems of a 'Duke' plant near the soil level. 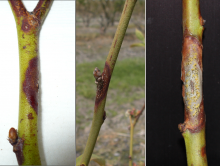 Cause Godronia cassandrae (asexual: Fusicoccum putrefaciens), a fungus. The disease occasionally can interfere seriously with the establishment of new plantings in British Columbia and Washington. It is considered to be the most serious canker disease of blueberry in British Columbia. It is less serious in established fields because only new wood can be infected. However, disease incidence has been increasing in older fields since the late 1980s.

The fungus overwinters in cankers on stems and crowns of infected plants. Conidia account for nearly all infections and disease spread. Conidia are released from pycnidia in wet weather and disperse by splashing rain. Conidia infect stems primarily at leaf scars from March through June. Natural openings in bark also may serve as infection sites. Long cool, wet periods are required for infection. Conidia also are produced and released from August through October but probably account for few infections.

Symptoms Infections appear on current-year stems at bud sites or wounded areas as small reddish-brown lesions in early spring. As these cankers enlarge, the centers usually become gray and margins turn reddish-brown or dark-brown, giving the canker a bull's-eye appearance. Small, dark pimple-like pycnidia can frequently be found in the canker. Cankers become progressively larger each year and eventually may girdle stems, causing them to wilt and die. Leaves on infected branches may turn color earlier in the fall.

Cultural control Sanitation is a critical component of successful management.

Chemical control No fungicide is currently registered for control. Research in British Columbia indicates that broad-spectrum fungicides with multi-site modes of action used for control of other disease are effective. Management of other diseases in the spring may indirectly be controlling this disease.