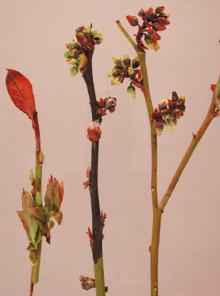 Infected buds fail to open and die along with stem necrosis extending in both directions from the node.

Infections do not generally go beyond one year old wood.
Photo by Iain MacSwann, 1982. 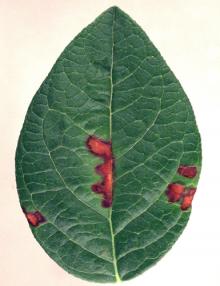 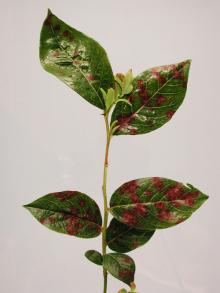 Leaf spots can be numerous during wet springs.
Melodie Putnam, 2010.

Cause Pseudomonas syringae pv. syringae, a bacterium that multiplies in buds and on expanding aerial plant tissues as an epiphyte during the late fall and into the spring months. The pathogen is rarely isolated from asymptomatic tissues during dry weather but can be isolated from symptomatic, diseased tissues year-round. Additionally, P. syringae has been reported to colonize weeds and grasses. The disease is favored by presence of overwintering inoculum in diseased stems and buds on plants in the field. Disease is also favored by large epiphytic populations of the pathogen on the surface of emerging tissues in the early spring months. Wounded tissues provide entry sites for the pathogen into the plant. Wounds can be caused by pruning, insects, hail, wind, and frost injury. Disease incidence and severity in the spring is often greater following frost injury the previous fall. Many isolates of P. syringae can catalyze the formation of ice crystals at elevated temperatures such as 2°C and lower. It is proposed that frost injury is enhanced by ice-nucleation active P. syringae and wounds caused by freezing allow the pathogen to enter damaged plant cells. Cold weather (temperatures below 10°C) and moisture favor development of the disease.

Bacterial canker can be particularly severe on young plants in new plantings because a high proportion of the wood is succulent and susceptible to disease. The bacteria can be disseminated by wind, rain, or insects or introduced with infested propagation wood or infested nursery stock. Equipment such as pruning tools and mechanical harvesters may carry the pathogen from plant to plant in addition to causing entry wounds.

Symptoms Only canes produced the previous season are attacked. A water-soaked lesion first appears on canes in January or early February and rapidly becomes a reddish-brown to black canker. Cankers may extend from a fraction of an inch to the entire length of the 1-year-old cane. Buds in cankers are killed. If the stem is not girdled, buds above the canker grow. If girdled, the cane portion above the canker dies. Leaves turn orange and wilt if death occurs after buds have leafed out. The disease also will attack cuttings in propagation beds. Severe Botrytis infection can cause similar symptoms.

Chemical control Spray twice, first before fall rains, preferably the first week in October, and again 4 weeks later. Several spring applications are recommended in British Columbia, starting at budbreak and using the lower rates of copper. It is not known if spring applications are effective or sustainable in western Oregon or Washington. Multiple applications and/or low rates of chemicals are notorious for encouraging resistance to these products. Bacteria resistant to copper products are widespread and have been found in 75% to 81% of the isolates collected.

Biological control Addition of surface disinfectants, such as Oxidate 5.0 or Jet-Ag, to the tank have been helpful with these products.