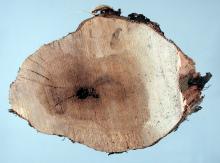 Send samples into the Plant Clinic for diagnosis since each of the various trunk disease fungi may have very similar symptoms. This one grapevine had 4 different fungi including Phaeoacremonium, Botryosphaeria, Phomopsis, and Eutypa.

Cause Various members of several fungal families cause trunk diseases in grapevines, and multiple pathogens may be present in an affected vine. Symptoms of discoloration of a vine cross-section are not sufficient to identify a particular cause. Trunk diseases should be considered a syndrome or disease complex potentially involving members of the Ascomycota families Botryosphaeriaceae (such as Botryosphaeria and its anamorphs), Diatrypaceae (such as Eutypa), Togniniaceae (Phaeacremonium, Phaeomoniella), Valsaceae (Phomopsis, Cytospora) and the orders Helotiales (Cadophora spp.), Xylariales (Seimatosporium); and the Basidiomycota, largely the wood decay fungi such as Armillaria and Ceratobasidium. All of these fungi have been found in association with diseased grapevines in Oregon.