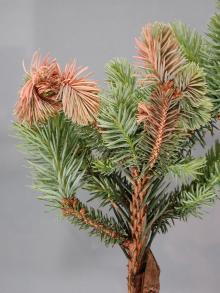 Cause Sirococcus conigenus (formerly Ascochyta piniperda), a fungus. It attacks many conifer including western hemlock; Jeffery, ponderosa, and red pine; and blue and sitka spruce. The fungus overwinters in dead shoots. Spores are rain-splashed from one tree or seedling to another. Infection is on or near the base of needles on new shoots as they begin to grow in the spring. Seedling infestation occurs when the fungus colonizes the seed cones.

Symptoms New shoots die back in summer. At first, needles may turn brown starting at the base or fall off in the middle of the shoot near the infection point. If the twig dies during shoot elongation, a characteristic hook shape develops. Diseased twigs slowly die back to the branch where the bud began. Numerous small, black, fruiting bodies (pycnidia) develop on the twig about a year after the infection began. Can be confused with frost or herbicide damage.