The rhododendron cultivar Unique, grown in a nursery showing necrotic leaf spots along the margins of the leaves.
Photo by Jennifer Parke, 2003.

It is uncommon to see necrosis occur out to the leaf tip. Usually the necrosis affects the midrib, as pictured here, and then goes down the petiole.
Photo by Everett Hansen 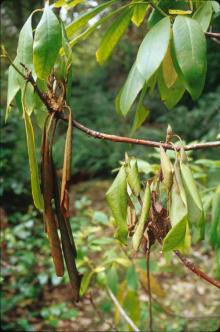 Leaves collapse once the stem has been girdled.
Photo by Everett Hansen 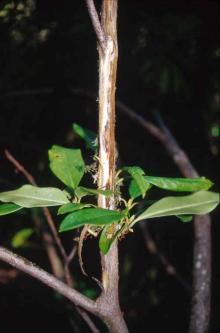 The bark has been stripped back to expose the discolored vascular system below.
Photo by Everett Hansen 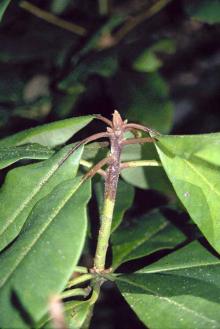 This shows the typical tip dieback to Rhododendron spp. from this disease. Leaves will collapse soon.
Photo by Everett Hansen

Cause A fungus-like organism, Phytophthora ramorum, was found killing wild rhododendrons in a few isolated sites just north of Brookings, OR during the summer of 2001. Federal and international quarantines have been established to prevent the spread of this pathogen in soil and infected plant material. Since the initial discovery, the disease is considered established and Oregon has focused on limiting spread in Curry County through early detection, monitoring, and eradication of symptomatic tanoak trees. Despite these efforts, the quarantine area in Curry County has expanded many times since 2001 from 9 sq. miles to over 500 sq. miles. The rate of disease spread increased most dramatically in 2014 requiring the quarantine area to nearly double in 2015.

In the spring of 2003, the disease was discovered in a wholesale nursery in Oregon, a south-coastal nursery in British Columbia, and in Washington at a retail outlet. Each year the disease has been found in a few PNW nurseries based on extensive sampling by state departments of agriculture. The disease has not been found in any Christmas tree plantations in the PNW. In 2005 this became a federally quarantined pathogen. Only those nurseries within regulated areas of California, Oregon, and Washington, where P. ramorum had been detected, on or after March 31, 2011, were required to be inspected and certified by regulatory officials to ship out of state.

The disease was also discovered in a botanical garden landscape on the north end of Bainbridge Island, WA in 2015. Several plants were infected with the NA-1 clone including Camellia, Gaultheria, Mahonia, Pieris, Rhododendron, Vaccinium, Viburnum and Vinca. The pathogen was detected subsequently requiring additional efforts focused on containment

The host list for this organism includes many different plants. The rhododendron cultivars most often found positive for this organism include Baden Baden, Cheer, Holden, Jean Marie and 19 others. Tip dieback and/or leaf spotting occurs on bigleaf maple, camellia, cascara, coast redwood, Douglas fir, honeysuckle, horsechestnut, huckleberry, kinnikinnick, myrtlewood, Pacific madrone, Pieris, poison-oak (stem cankers), rhododendron cultivars, salmonberry, Viburnum and others (those in bold were found infected in nurseries most often). Lethal bark cankers develop on oaks and tanoak. Oregon white oak (Quercus garryanna) does not appear to be very susceptible when challenged with the pathogen in lab tests.

Phytophthora ramorum is a fungus-like organism well-adapted to the cool, wet conditions of the Pacific Northwest and tolerant of heat and drought. Several spore types are produced that help this organism survive and spread. Spores may survive in potting media for 6 to 12 months. They can even survive in composed municipal green waste. Spores landing on wet leaves or stems germinate and infect the plant with as little as 1 to 6 hours of wetness. Young leaves are especially susceptible. Within a few days, sporangia are produced, which release tiny swimming spores (zoospores). The sporangia themselves can also detach, germinate, and infect. Sporangia and zoospores can be moved with windborne rain, irrigation water, or with water splashed onto foliage. Natural spread of spores can be up to 3-4 miles a year. Longer distance transport occurs via the movement of infected nursery stock or infested soil. Lesion size and infection frequency increased at higher N fertilizer rates in the susceptible cultivars 'English Roseum' and 'Cunningham's White'.

There have been 5 migrations of P. ramorum between continents and 3 distinct introductions into the North American west coast. There are four clonal lineages named NA1, NA2, EU1 and EU2. The North American clone, NA1, was the first clone to arrive in the US with plant imports of exotic ornamentals into nurseries and is responsible for SOD outbreaks in both California and SW Oregon forests. A second introduction, of the clone NA2, occurred into British Columbia and Washington nurseries. A third introduction of the European clone, EU1, likely arrived from Europe into Pacific Northwest nurseries. This single infected tanoak with EU1 clonal lineage was found in southeast Oregon in 2015 and likely spread from a nearby horticultural nursery that also tested positive for EU1. Due to its more aggressive nature it has locally spread to more locations within a 1,000 acre area.

Symptoms Symptoms on rhododendrons are very similar to those caused by sunburn and other, foliar Phytophthora species. Leaf lesions penetrate through the plant tissue so that spots can be seen on both sides of the leaf. They can be triangular in shape and extend along the leaf petiole and midrib, or leaf spots can occur where water accumulates on the leaf margins. Leaf spots have diffuse margins and the appearance of watersoaking. Infections of both above- and belowground tissues may not produce symptoms making this a very difficult disease to detect.

In southern Oregon, tip dieback was observed where shoot tips became progressively necrotic. Leaves on these shoots may remain green for a while but the petiole becomes necrotic and eventually the whole leaf collapses once the stem is girdled. If left unchecked, the pathogen can kill rhododendrons, particularly if the apical bud is infected.

Symptoms on the other hosts are difficult to distinguish from those caused by other pathogens. If you suspect you have seen a P. ramorum-infected plant in Oregon, call the Invasive Species Hotline, 1-866-INVADER (1-866-468-2337).

Cultural control Management efforts in Pacific Northwest nurseries are focused preventing new introductions, new infections, and eradicating the pathogen where it is found. Early detection is vital to preventing disease spread. Practices useful in managing other foliar Phytophthora diseases are helpful in protecting plants from infection by P. ramorum.

Chemical control Use fungicides as general preventative treatments. If you actually find this disease in your nursery stock, your state department of agriculture will work with you to eradicate this quarantine pathogen. Most fungicides used to manage Phytophthora do not kill this organism. They can only prevent establishment of the organism before it gets into the plant. They can also prevent continued growth if the organism is already inside the plant thereby preventing the development of symptoms. Once chemical activity has subsided with time, the organism can resume growth within infected plants.

Resistance management through the use of tank-mixes or alternating products with different modes of activity will be very important. Limit the use of any one group during crop production.

Note Treatment with phosphonate compounds (Group P7 fungicides) significantly and consistently reduced lesion size in California Live Oak, especially when injected into trees. However, tests with nursery plants such as rhododendron and Douglas-Fir have not shown these products (such as Aliette, Alude or Phostrol) to be as efficacious as other materials with different modes of action.

Use of Anti-Stress, Zonix or Nu-Film plus Zonix may help protect plants while in quarantine but still allow the development of possible infections. Treated plants had lower inoculum production and can be scheulded for destruction if symptoms develop.