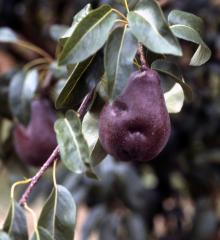 Note the sunken pits on this fruit. 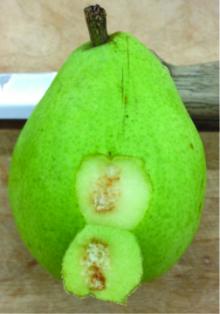 Stink bug cork spots are shallow and have irregular, but not square, shape. This is late BMSB damage to Anjou pear. 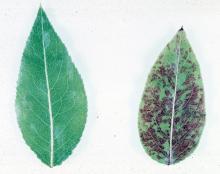 Cause A virus disease that is graft transmissible. There is no indication that an insect vector spreads the virus. The disease is sporadic in the Pacific Northwest, apparently in conjunction with specific climatic conditions. Cultivars react differently; only Bosc shows all types of symptoms. Cultivars showing mild symptoms include Clairgeau, Old Home, Packham's Triumph, and Waite. Occasionally, the cultivar Packham's Triumph fruit show severe symptoms. Studies suggest that the disease is associated with the latent Apple stem pitting virus and Apple chlorotic leaf spot virus and with the diseases Apple green crinkle and Pear vein yellows

Symptoms Under specific climatic conditions, the disease appears in noncertified 'Bosc', to some extent in 'Anjou', and occasionally in 'Comice' and 'Bartlett', causing a fruit pitting and deformity. In 'Bosc', a roughened bark condition may also accompany the pitting. There is excessive stone-cell development below the pits in the skin. Pitting may be severe in 'Anjou' but is less common than in 'Bosc'.

Light or moderate fruit symptoms may be confused with pitting from tarnished-plant bug damage, stink bugs, boron deficiency, or corky spot. Stink bug feeding damage is a depressed blemish with a puncture site that is always visible in the center leading to a brown cork-like area in the flesh.