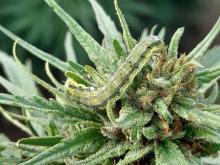 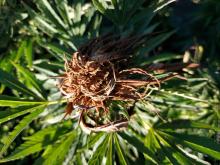 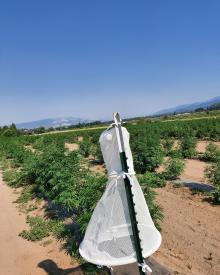 Pest description and crop damage Several moth caterpillar species (Order: Lepidoptera; Family: Noctuidae) can be found in hemp in the PNW. All these caterpillars or larvae have three pair of true legs behind their head. The corn earworm, budworm, armyworm, and cutworm are varied in color, but all have five pair of pro-legs towards the rear end while larvae of both looper species appear as green caterpillars with white longitudinal stripes and have just three pair of pro-legs at the rear end. They move in a looping fashion, like an inchworm.

The corn earworm is the most damaging of these caterpillars as it feeds on the floral parts of hemp plants. Also, corn earworm caterpillars sometimes nestle within flower bud materials, making it harder to scout for them on plants. Corn earworm feeding on flower buds create extensive bud tunneling and wounds, allowing pathogens to invade that can aid development and presence of bud rot. Loopers chew holes and ragged edges in hemp leaves. Damage to mature hemp plants from caterpillars, other than corn earworm, is usually minor and does not require control.

Biology and life history Corn earworm adult moths are nocturnal; therefore, they are most active throughout the dark periods during their life cycle. Females deposit eggs singly on hemp leaves and flower buds. Based on the available information from other crops, each female may lay up to 1,500 eggs in her lifetime, and each female may lay up to 35 eggs per day. Eggs hatch within 2 to 4 days, and newly emerged caterpillars start to feed on hemp plants, usually found feeding on flower buds. Young caterpillars (first and second instars) are small (about 2 mm in length), but they grow quickly and are fully developed (fifth and sixth instars) within 2-3 weeks. The mature caterpillars are about 25 mm in length. Corn earworm caterpillars are highly varied in color, ranging from pink, green, pale brown to almost black; however, matured caterpillars are mainly green in color when found in hemp. Mature caterpillars leave the feeding site, drop to the ground, burrow into the soil and change to the pupal stage. In summer, adults emerge in approximately 2 weeks and produce a new generation. However, in the fall/autumn, the pupal stage remains dormant until the following season.

Scouting and thresholds Pheromone traps can be used to monitor corn earworm adults in hemp during flowering stage. It is also critical to scout hemp fields for caterpillars feeding on flower buds to determine treatment application. At this point, there are no established treatment thresholds for corn earworm in hemp.

Generalist predators such as big-eyed bugs, damsel bugs and spotted lady beetles are known to prey on corn earworm caterpillars. Also, corn earworm eggs can be parasitized by the Trichograma spp. and caterpillar by the Archytas marmoratus. However, the biological control agent's role on controlling corn earworm on hemp has not been fully investigated.