Cankers on this 'Duke' blueberry. 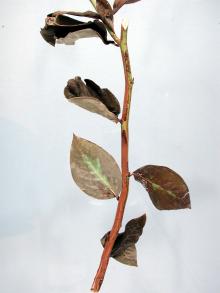 Cankers girdle the stem of this 'Duke' blueberry.

Symptoms The principal canes are affected. Reddish conical swellings appear in summer and fall on current-year canes. Small pimple-like swellings (pycnidia) develop on the canes' surface. The lesions enlarge and become fissured in the second year, giving the cane a rough, blistered appearance. Later, canes may become girdled and die. Whole plants may die when cankers extend into the root crown.

Chemical control In general, use of fungicides has not been effective.