Notice the flower blight caused by this virus.
Dept of Horticulture, OSU 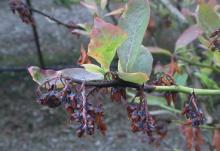 Symptoms of scorch on 'Berkeley'. 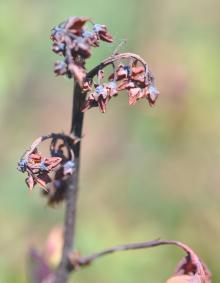 Flower and shoot dieback from Blueberry scorch virus on 'Elliott'. 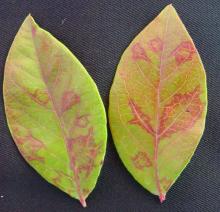 Cause The Blueberry scorch virus (BlScV), which is vectored by aphids, can infect blueberry and cranberry. Groups of 25 aphids transmit the virus 10% to 15% of the time. Transmission can occur between early May through early August. Once a plant is infected, symptoms may take 1 to 2 years or more to develop. This makes early detection vital for controlling the disease. The virus was first observed in a 'Berkeley' blueberry planting near Puyallup, WA in 1980 and was initially observed in western Oregon and Washington (near Puyallup and in Clark County), but not northern Washington or in the Fraser River Valley of British Columbia. An outbreak of BlScV with more severe symptoms was reported in British Columbia during the summer of 2000. 'Sheep Pen Hill Disease,' first reported in New Jersey in the 1960's, is now known to be caused by BlScV. The strain of BlScV initially identified in New Jersey causes symptoms in cultivars except Jersey, whereas the strains initially identified in Oregon and Washington were symptomless in Bluecrop and Duke as well as several other cultivars. There is a much broader range of BlScV strains in B.C. than in New Jersey, Oregon and Washington, suggesting the virus may have evolved in native hosts in BC. BlScV has been found throughout the main blueberry production areas of BC; all planting material from BC should be considered suspect and potentially infected with the virus. Quarantines are in effect for Washington and Oregon to restrict the movement of plants from states where the disease occurs. The virus has also been detected in the Netherlands, Germany, Italy, and Poland.

Symptoms In spring, shoot tips die back; sometimes on only one or a few branches. Flowers blight just as the earliest ones begin to open. Early symptoms may be confused with bacterial canker or mummy berry. The entire bush becomes infected within 1 to 3 years. Infected plants repeat this symptom cycle each spring. (In contrast, plants infected with the Blueberry shock virus will recover.) Fruit production and shoot growth are markedly reduced on infected plants. Tolerant cultivars may show some yellowing of the leaf margins but no blighting of flowers or leaves. Other viruses and pathogens, as well as frost damage, can cause similar symptoms.

The cultivars Olympia and Stanley only exhibited a marginal leaf necrosis, 'Bluecrop' develops a general chlorosis, and Jersey is the only northern highbush cultivar that remains symptomless. In some cultivars, with some strains of the virus, an oak-leaf pattern develops in the fall, but this symptom is easily overlooked.

Cultural control When the disease is first suspected, have plants tested to confirm the presence of this specific virus. Do not wait until the following year to see if symptoms reoccur before testing, delaying control measures will increase the number of plants that will need to be removed. Remove infected plants that exhibit blighting, test adjacent plants to identify infected but symptomless plants. Monitor the field for at least three years for symptoms.

Note: This disease has a medium risk rating under Agriculture and Agri-Food Canada's Plant Health Risk Assessment for Vaccinium plants and cuttings from the continental United States. There may be a requirement for testing propagation material bound for British Columbia to ensure it is virus-free.