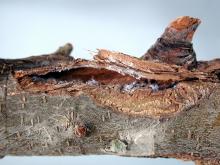 Note the fuzzy white structures of the wooly apple aphid in the cracked area of the bark.

Cause Cryptosporiopsis perennans (sexual: Neofabraea perennans), a fungus. The fungus is closely related to that causing anthracnose, and the diseases are somewhat similar. The fungus overwinters in cankers and infected fruit. Conidia are exuded from acervuli and dispersed by rain. Infection occurs in the fall, but cankers will not appear until spring. Infection may also occur in the spring but trees are more susceptible in the fall. Perennial canker; however, is associated with the presence of woolly apple aphids, low temperature or southwest injury, and pruning wounds. The fungus can infect through the wounded portions of the tree. Wooly apple aphids cause wounds each year on the edge of the canker allowing the fungus to reinfect that area. Fruit infection increases 2 weeks before harvest. Other hosts include crabapples, most pome and stone fruit, Amelanchier, hawthorn, and mountain ash.

Symptoms On wood-cankers made up of overlapping concentric rings of woody tissue encircling the center wound are characteristic of the disease. Apple anthracnose does not have the concentric rings of woody tissue in the canker. Each ring indicates the disease's progress for 1 year. As the canker enlarges from year to year, it cuts off more of the sap-conducting tissue, reducing the growth and bearing capacity of the tree. Sometimes scaffold limbs are girdled and a large part of the tree killed.

On fruit-the symptoms of the fruit rot, "bull's-eye," phase of the disease are identical to that caused by anthracnose. "Bull's-eye rot" occurs at open lenticels or at breaks in the skin. The rot spots may be only specks, but most of them are 0.5 to 1 inch across by the time the fruit reaches market. Spots may occur singly or be numerous. They may be pale yellowish cream or uniformly brown but are most often brown with a pale center that forms a bull's-eye. Spots are flat to sunken, and rotted tissues are relatively firm. The skin over the surface does not break easily under slight pressure. Rot may be shallow or nearly as deep as wide. In the deeper rots the penetration is more or less U-shaped. Usually, decayed tissues are somewhat mealy and do not separate readily from healthy tissues. Spore-bearing tufts on the causal fungus may or may not be present on the surface of the rot but when present are short, wet, cream colored, and protrude through the skin.

Chemical control Use as a preventative tactic. Not recommended after the canker phase of this disease has begun.