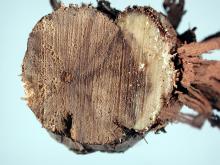 Older vines show wedge-shaped cankers in the trunk and cordons. This vine only had a small section of living vascular tissue seen on the right side of this image. 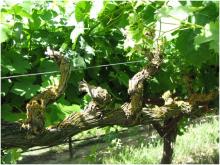 Dead spurs on a grape cordon indicate canker disease due to Botryosphaeria.

Cause Members of the Botryosphaeriaceae, including multiple species of the fungus Botryosphaeria, are known to cause a range of symptoms, which have also been referred to as "Bot canker." These fungi cause perennial cankers and enter vines through fresh injuries such as natural cracks, pruning wounds, or any large cut to cordons or trunks. Spores are released from pycnidia on diseased vines during rain or overhead irrigation. Spores can germinate in a fresh wound when temperatures are above 5°C (41°F). Fresh wounds are more susceptible to spore infection than older cuts. Pruning wounds made early in the dormant period are much more susceptible than wounds made late in the dormant period. These fungi become established in the vine at a wound site, growing toward the roots. Although water stressed vines are more susceptible to infection, subsequent colonization of the vine is more limited. Symptoms are generally not noticed until year 8 when disease incidence is about 10% but yield losses are to this point minor. Increasing losses occur from reduced vine productivity, poor yields and extra costs for cultural and chemical management.

The extent of diseases due to the Botryosphaeriaceae in the Pacific Northwest is unknown. B. dothidea, B. corticola (=Diplodia corticola), B. quercuum, B. stevensii (= D. mutila), Lasiodiplodia, and Neofusicoccum parvum have all been recovered from vines in Oregon; and Neofusicoccum parvum and B. dothidea have been found in Okanagan vineyards in British Columbia. Disease due to the Botryosphariaceae is likely to have been overlooked, as symptoms are similar to those caused by Eutypa.

Spread is thought to be by movement of spores from within an infected vineyard, rather than from sources outside of it. Spores, produced in pycnidia in infected vines and on prunings left behind, are spread by water splash up to 6-ft away. Use of infected cuttings can also spread the disease. Vines as young as five years old may be affected. Water stress will exacerbate the severity of symptoms.

Symptoms In cross section, older vines will show wedge-shaped cankers in the trunk and cordons, similar to those caused by Eutypa. On spur-pruned vines, infected spurs may not grow in the spring, or there may be growth followed by rapid wilt and collapse of the foliage. Some spurs may be dead, while others on the same cordon may produce apparently healthy foliage. In California, there are no foliar symptoms apparent on plants that have been infected by various species of Botryosphaeria. This is in contrast to Eutypa, which produces stunted spring growth and yellowed leaves. Young vines may show cankers, vascular discoloration, or dark streaking of the xylem. Drought can increase the severity of symptoms.

Cultural control Preventive tactics are more effective when started early in the life of a vineyard.

Chemical control Useful when pruning a new planting or retraining vines and making large trunk or cordon cuts. Tank mixes with products from different FRAC groups has also been helpful.

Biological control Use in conjunction with cultural control tactics such as thorough sanitation. Trichoderma sp. have been shown to help protect pruning wounds, basal ends of propagation material, and graft unions before infection. Use within 24 hr of pruning and again in 2 weeks.