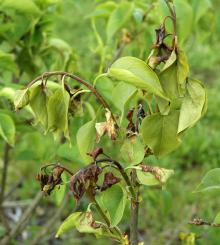 When shoots begin to die they tip over in what is called a Shepard's crook symptom. 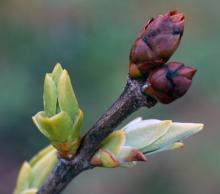 Buds may fail to open in the spring and turn necrotic. 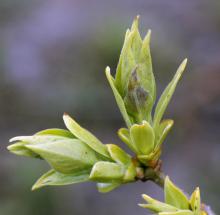 Water-soaking is a common first symptom of bacterial blight on lilac.

Purple cultivars get the disease too!
Jay W. Pscheidt, 2011.

Many shoot and leaves can be blighted in the garden. 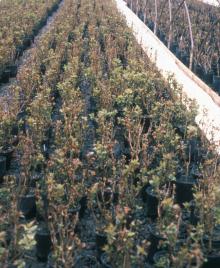 Lilac grown outside in nursery settings can have a problem with bacterial blight.

Leaf spots and flower blight can be seen in this image.

Cause Pseudomonas syringae pv. syringae, the bacterium that also causes bacterial blight of pear, blueberry, cherry, maple, and many other woody plants. Bacteria overwinter on diseased twigs or as epiphytes on healthy wood. Factors that weaken or injure plants predispose them to disease. Such factors include wounds, both accidental and from pruning or budding, frost damage, incorrect soil pH, poor or improper nutrition, and infection by other pathogens.

Two common genetic traits increase the bacteria's ability to cause disease. Most produce a powerful plant toxin, syringomycin, which destroys plant tissues as bacteria multiply in a wound. Bacteria also produce a protein that acts as an ice nucleus, increasing frost wounds that bacteria easily colonize and expand.

Some species of Syringa have shown resistance in western Washington including S. josikaea, S. Komarowii, S. microphylla, S. pekinensis, and S. reflexa. Most cultivars of S. vulgaris are susceptible, but some have been observed with less disease when planted in a garden; those cultivars include Edith Cavell, Glory, Ludwig Spaeth, and Pink Elizabeth. Note that 'Ludwig Spaeth' is highly susceptible under intense nursery production systems.

Symptoms The disease starts as brown spots on stems and leaves of young shoots as they develop in early spring. A yellow halo may also be around the spot. Spots become black and grow rapidly, especially during rainy periods. Further infectious development depends on the age of the part attacked.

On young stems, infection spreads around the stem and girdles it so the shoot bends over at the lesion and the parts above it wither and die. On mature stems, spots usually enlarge along the stem, causing leaf death only within the infected area.

Young, infected leaves blacken rapidly starting near the margin and continuing in a wedge-shaped pattern down to the petiole. Eventually the entire leaf dies. On older leaves, spots enlarge slowly. Sometimes, several spots will run together, and the leaf may crinkle at the edge or along the midvein. Flower clusters also may be infected and rapidly become blighted and blackened.

Buds may fail to open or may turn black and die shortly after opening. Symptoms are similar to those of winter injury.

Chemical control Focus first on cultural control tactics. Spray before fall rains and again before budbreak in spring. Bacteria resistant to both copper products and antibiotics have been detected in many nurseries. Limit the use of any one group during crop production. Copper products may be phytotoxic when used during the early growing season. Use of anti-transpirants has not been effective.